Lax self-certification rules and poor record keeping have seen the Lifeline program – the subsidized cellphone scheme aiming to give low-income Americans access to a mobile phone – taken advantage of, according to new research. The program – which spent roughly $2.2bn on subsidized phones in 2012 – has seen rules tightened by the FCC after concerns that carriers were not doing due-diligence on whether participants were actually eligible. However, according to research by the WSJ, there are suggestions a sizable portion of those still using Lifeline may not, in fact, fall within its remit.

Research conducted by the FCC for the newspaper into subscribers on Virgin Mobile, AT&T, Telrite, Tag Mobile, and Verizon, indicated more than 40-percent of Lifeline subscribers either could not demonstrate their eligibility, or simply did not respond to demands for proof.

Changes in the FCC rules around Lifeline came into effect last year, toughening considerably what hoops would-be subscribers needed to jump through in order to get service. For instance, some states had permitted applications without any evidence of eligibility – which includes being on Medicaid, food stamps, or various other criteria – while others allowed self-certification rather than production of official evidence. 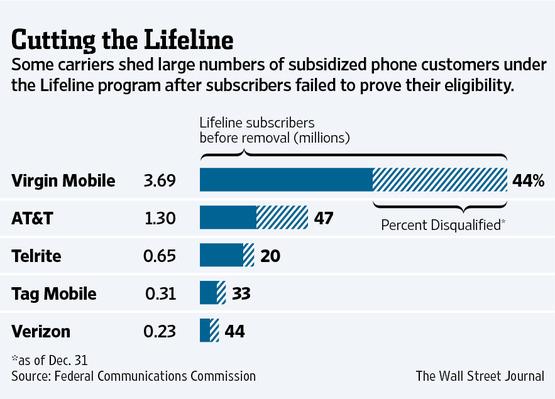 Carriers are paid $9.25 per customer, per month by the Universal Service Administrative Co., which organizes the Lifeline scheme. Roughly $2.50 is contributed per month by American tax payers, though that is subsequently spread across several of the subsidy schemes, including broadband and landline access.

As a result of the new research, the FCC is apparently considering levying fines on carriers which have been particularly liberal with their Lifeline sign-ups. That could prove expensive: up to $150,000 per violation per day, though that’s capped at $1.5m.

The carriers, meanwhile, argue that the previous lax criteria – and the absence of a central database of those involved in the scheme – had made it difficult for them to monitor users; there were also few checks as to whether households did indeed have only one active Lifeline account, as is the rules. Still, the FCC expects savings of up to $2bn over the next three years through toughening the checks.