Study shows kids want Apple products the most for Christmas

The holiday season is right around the corner, and it’ll kick in to full swing after this weekend when all of the Thanksgiving festivities wrap up. So then, what are the good little boys and girls putting on their Christmas lists this year for Santa? It seems Apple products are the go-to gadget for most kids.

According to research firm Nielsen, American kids aged 6-12 are more excited about the latest iOS devices than any other electronic devices. Almost half the kids surveyed wanted a full-sized iPad, and 36% wanted an iPad Mini. The iPod Touch and iPhone are were also on the list, with 36% and 33%, respectively. 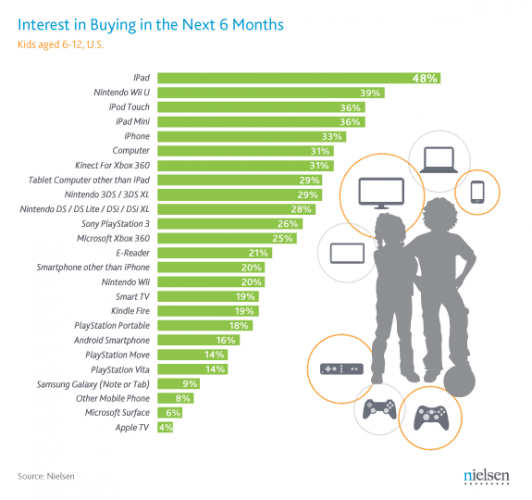 In second place was the Nintendo Wii U, which garnered 39% of kids. It turns out that four out of the top five most wanted items by kids are Apple products. Coming in at number six is a computer with 31% interest from kids. Honestly, we’re not too surprised by the vast interest in Apple’s products, especially with kids. Apple names their products in order for people to easily remember them and they’re really simple names, so we’re not surprised that kids know what all the latest iDevices are all about.

Gaming was also a huge hit, according to the survey. Microsoft’s Xbox 360 made the list, as well as the PlayStation 3, and an assortment of Nintendo DS products. However, while Apple products dominated the top of the charts, the one item that kids were least excited about was the Apple TV. Frankly, we’re not too surprised by that, since kids probably aren’t big into televisions and all the cool video apps that you can get on the Apple TV. So for now, it seems that gaming, and playing around with tablets is the thing to do.