We live in an age where almost anything can be created – or replicated – for a fraction of the cost of a commercial product. For a couple of grad students wishing for some brain signal recording equipment back in 2011, their wish became a matter of original creation, eventually resulting in an open source community for neural technology and a device which is made at a fraction of the cost of its next least-expensive competitor.

The group is called Open Ephys, and the former grad students are Josh Siegle and Jakob Voigts. They needed several brain signal recorders back in 2011, each of which would have cost them $60,000 to own. Instead of opening a lemonade stand to raise funds, they decided to get creative and make their own systems.

Fast forward to 2014 and the duo have manufactured 100 boards that look like the model you see in this article. These boards are able to use electrodes implanted in an animal’s brain to translate electrical signals emanating from said animal. 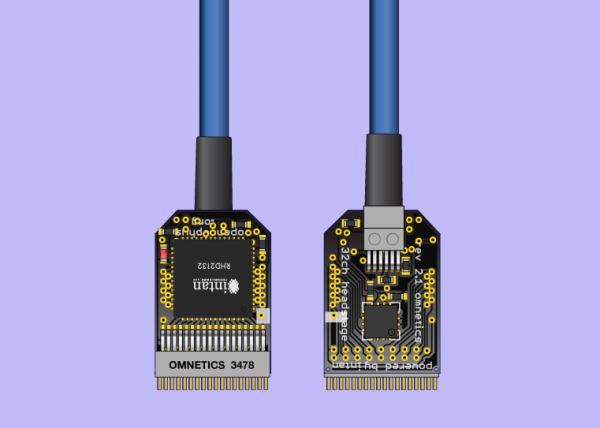 These boards are able to interface with headstages that amplify, filter, multiplex, then digitize signals from the brain. Normally these four functions have individual integrated circuits (ICs) to work with on a higher-priced system, but Open Ephys board works with one chip to do all four steps.

One chip from Los Angeles-based Intan Technologies is able to do all four tasks, cutting down costs for the board immensely. Eventually solutions will get small enough to be able to be entirely mobile, planted in the back of your head to read everything about how your brain functions.

For now we’re stuck working with animals with interesting-looking headsets like the one you’re seeing mocked up here. Over at Open Ephys you’ll be able to learn how to make your own brain scanner to attach to your least-loved animal. Make certain you’ve got a license for all this, of course – no unauthorized scanning allowed!