According to the Recording Industry Association of America (RIAA), who likely keep track of info like this pretty closely, revenue from streaming music has outpaced CD sales for the first time ever. Streaming services like Spotify, Play Music All Access, and Pandora helped contribute to $1.87 billion in revenue for 2014, while CD sales were $1.85 billion. It’s a 6% revenue hike for streaming, which now accounts for 27% of total recording industry revenue. Industry growth was flat from 2013 to 2014, says the RIAA. 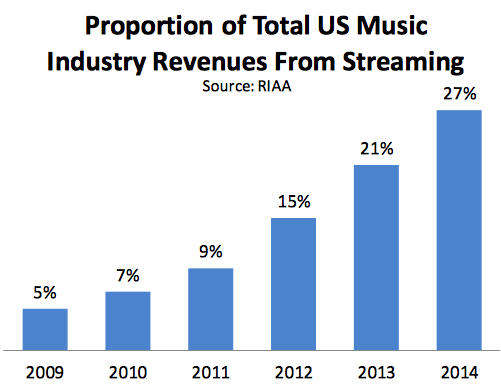 While the immediate assumption is that the industry must move to streaming to survive, other indicators may prove otherwise. Though streaming might be the future, overall “physical” sales of music (CDs, CD singles, LPs, EPs, Vinyl, etc.) were still more, commanding 32% of the industry’s income.

Digital downloads — think record sales via iTunes — were at 37%. 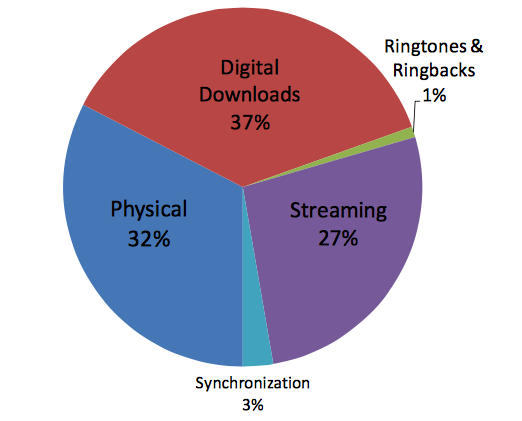 The breakdown may shed light on why Apple is rumored to be having issues striking streaming deals with record labels. Though we’ve heard iTunes sales were dropping, the overall health of digital and physical sales compared to streaming might cause record execs to take pause before going all-in on streaming. As we know, iTunes isn’t the only digital sales portal around, so their numbers aren’t necessarily reflective of the industry’s health.

Interesting news, especially when you consider Taylor Swift’s spat with Spotify or the ongoing “where is iTunes streaming?” narrative. While the current landscape doesn’t seem to reflect as much, streaming is the future for record companies. Let’s just hope they see the value proposition.