Steampunk is definitely here, and it’s not going anywhere any time soon. Whether you like it or not. And while we’ve covered it before, this time it seems a bit too much to handle. We love flash drives as much as the next person, and Steampunk is a great design aesthetic, but let’s be honest: price matters. Apparently, not everyone got that memo.

The designer is Will Rockwell, and he’s got a plethora of other Steampunk stuff available for your purchasing pleasure, and they’re a lot cheaper than what this flash drive is going for. So what’s it going for? Brace yourself. $3,000.00. No, you’re not seeing things, so don’t panic. The device itself was featured on Geeky-Gadgets.com apparently, and it was noted on that site that no one knew why the device was so expensive, unless it was a typo. Rockwell commented about the remark on his site, saying “Nope, it’s not a typo. $3,000 is simply what it would take to pry the drive out of my hands and take it from my world into yours.” He goes on to mention that if it were priced at $300 (…), it would go fast, but that so would the $300. 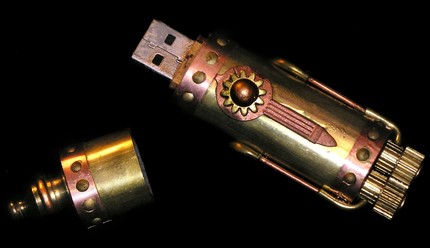 Will Rockwell respects the art of Steampunk far too much to undervalue the (his) work, and so the price tag is set in stone. In fact, he adds that a lot of the prices for his other items are going up, not down, and therefore the tag attached to this flash drive might actually be a bargain at some point in the future. We’ll go out on a limb here and say that might be [em]well[/em] into the future. But hey, better late than never, right? Right.