Today we’re taking a peek at the various game sales out on May the 4th, aka Star Wars day, across the gaming universe. If you’re in the mood for PC games, you’re going to be in luck. If you’re looking for Xbox One or PlayStation 4 games, you’re going to have a slightly more slim set of pickings. This day is just about the best day to buy Star Wars games if you’ve been waiting, though – so let’s take a peek!

If you’re looking for sales for PS4 and Xbox One, you’ll find the sales on Amazon, Best Buy, and the respective PlayStation and Xbox official game stores, but the sales mostly center on the movies you can buy through the platforms. If you’re looking for Star Wars Jedi: Fallen Order, you’re basically going to get it for around half the price plus a few dollars, regardless of platform.

The best deal you’re going to get on Xbox from the official Microsoft store is Star Wars Jedi Fallen Order for $36 instead of $60. You could also get the Deluxe Edition for $42 instead of $70, if you want to be fancy. Star Wars Battlefront II is on sale for $12 less than normal on the Microsoft store – from $20 down to $8.

PlayStation 4 via the Sony PlayStation store has very similar sales to those on Microsoft’s store for Xbox. The Fallen Order sale there also hits $36 instead of $60. Battlefront II: Celebration Edition is half the normal price. Bounty Hunter, Jedi Starfighter, and Racer Revenge are all also half their normal price. Star Wars Pinball Season 1 Bundle costs $14.39 instead of $24.

You’ll find just THREE Star Wars titles on sale today for Nintendo Switch. And the discounts are pitiful. Star Wars Jedi Knight Jedi Academy costs $3 less than normal, while Jedi Outkast has been given a discount of a whopping $2.51 below normal price. Star Wars Pinball costs $21 instead of $30.

If you’re looking over at the Humble Store – home of the original Humble Bundle – you’ll find sales that look very similar to those offered on Steam. If you’re hoping to add Star Wars games to your Steam collection via Valve, you’ll want to look at the Star Wars Day at Steam collection. There you’ll find such gems as Star Wars Battlefront for $5 instead of $10, and Star Wars: Shadows of the Empire for $2.09 – what a strange price?

The Humble Stores deals largely work with Steam – if you buy them from Humble, you’ll get the codes to open them with Steam. So it’s not a big difference from one place to the other, AND YET – some of the prices are different. Take for instance the Jedi Fallen Order price – nearly $15 more purchased through Steam VS getting it from Humble – weird! 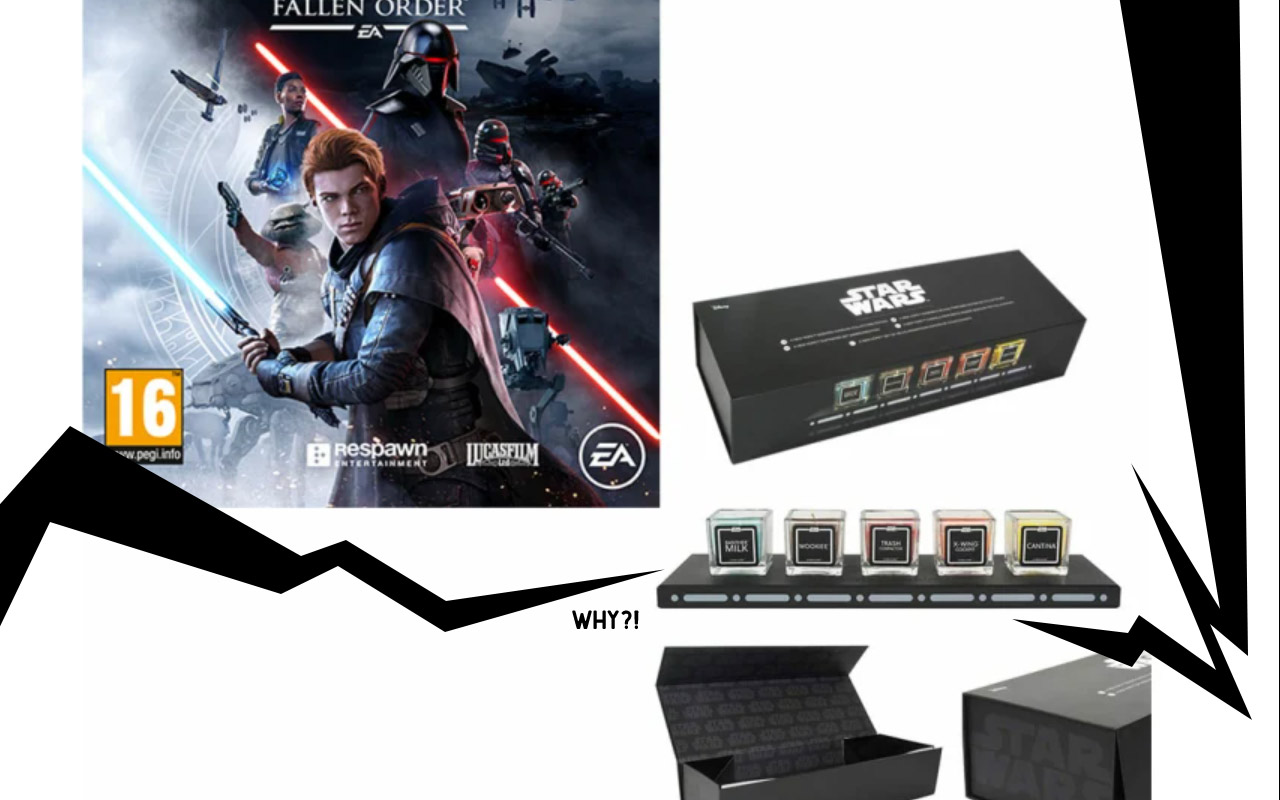 Drop in to GOG and you’ll find mostly older titles. You’ll get prices very similar to the others there, too, but every game is DRM free. That means you don’t need to download them through Steam. They’re yours, forever, without a separate online account.

The strangest deals come from Game.Co.UK. They’ve got games that come with free Official Scented Candles. *Why? We cannot begin to imagine why. You’ll find all of the sales listed above via the front pages of their respective stores. Star Wars day is just about the most exciting thing going on in the entire universe for the next 12 hours or so – so get in on it!