Yesterday brought a big Star Wars: Battlefront update, and with that updates gamers get access to a bunch of new stuff: Hutt Contracts, new firearms, and so much more. It’s 8GB to download and is available to game owners now, and brings a bunch of hero changes, a whole slew of bug fixes, several mission changes, nearly a dozen multiplayer mode changes, a couple handfuls of vehicle changes, and more. The Outer Rim expansion is now also available to all Season Pass owners.

The Outer Rim update is available for Xbox One, PlayStation 4, and PC, all three of which have received the following changes. One of the big new features is the addition of Hutt Contracts, which give gamers a new way to get Star Cards and new weapons. Other new functions and content include a Spectator Mode for private matches, a Partner Icon showing up on screen at all times, a redesigned multiplayer menu, rebalancing teams between multiplayer maps, increased rank cap, and more. 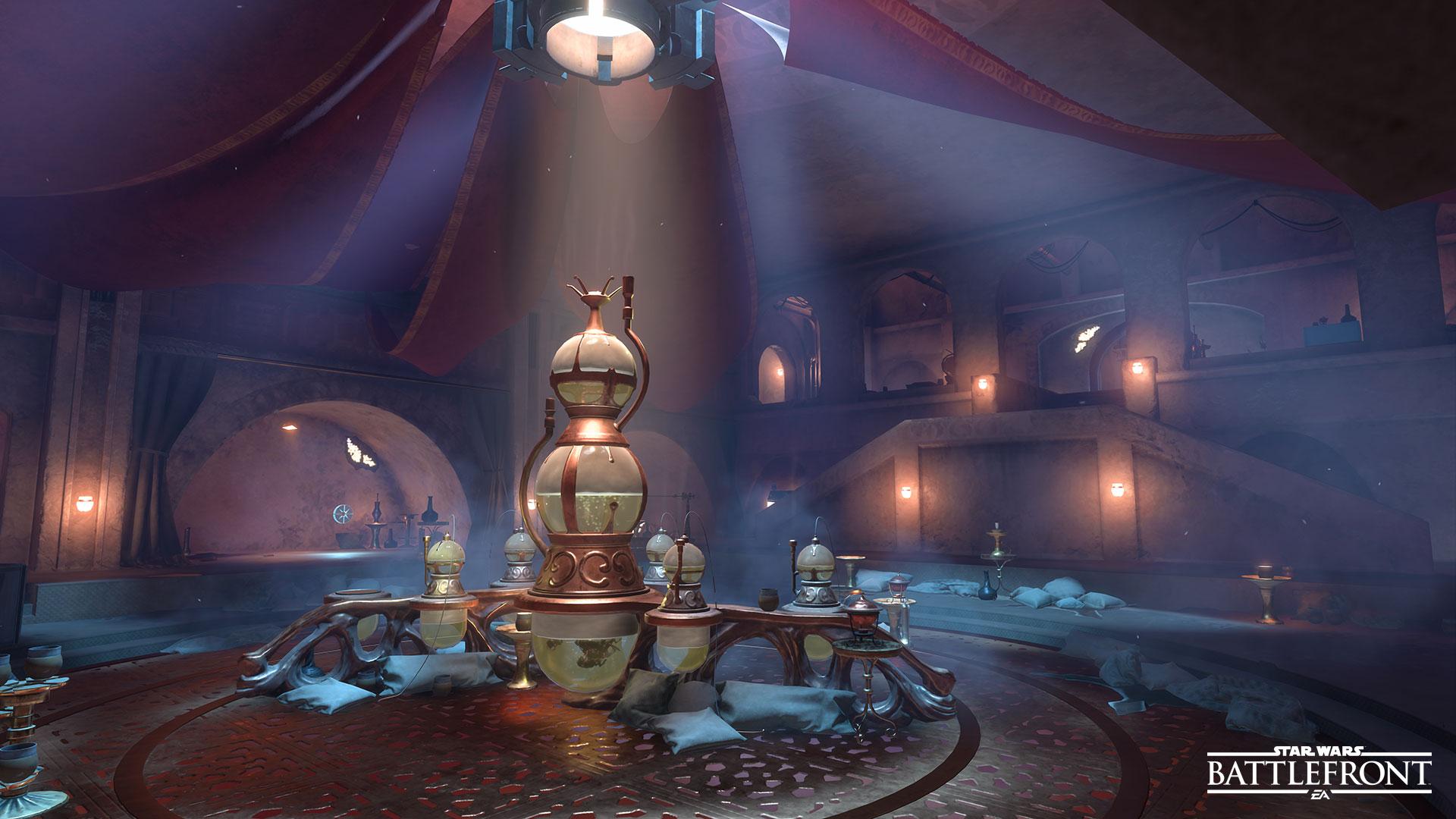 As far as Star Card and weapon changes go, the update brings DLT-19X and DL-18 weapon available through Hutt Contracts, as well as the T-7 Ion Disruptor power. A bunch of tweaks have been made: impact grenades have an increased level of damage and decreased explosion radius, certain types of shields can deflect specific projectiles, some survivalist and bounty hunter bugs have been ironed out, there’s a smaller blast radius and lower fuse timer for barrages, the ion grenade doesn’t cause collision damage anymore, and many more.

This still only scratches the surface of the update — check out the full changelog below:

Outer Rim: Now available for Season Pass owners
New Feature: Hutt Contracts add a new way of obtaining Weapons and Star Cards
New Feature: Spectator Mode introduces a way to watch Private Match games with a variety of camera angles and the ability to swap between players quickly
Multiplayer Menu: Redesigned the screen to facilitate players being able to get into a game mode more quickly and easily
Multiplayer: Teams will now re-balance when transitioning between maps
Teamplay Focus: New feature in which an objective can be highlighted by each player to highlight where players are heading; press X (Xbox One), Square (PlayStation 4), or E (PC)
Ranks: Increased Rank cap from 50 to 60
Scoreboard: Added icons for playing as a Hero, playing in a vehicle, and player ping
Scoreboard: Rearranged Score to be the first column represented
Scoreboard: Faded player row to signify when a player has been defeated
Combat: Added combat roll to non-Hero characters; strafe and double tap B (Xbox One) or Circle (PlayStation 4), for PC strafe and press Alt (can be rebound)
Partner: The Partner Icon will now be visible on screen at all times
UX: The currently selected Trait card is now shown in the deploy screen
Credits: Updated Game Credits list

New Weapons: The DL-18 and the DLT-19X can be obtained via Hutt Contrats
New Powerup: The T-7 Ion Disruptor has been added to the powerup pool
General: Triggering a card right before death will no longer result in an effect not triggering and the card going on cooldown
Bodyguard: Corrected the Level 3 description from “Decreases explosive damage by a high amount AND blaster damage by a small amount” to “Decreases explosive damage by a medium amount AND blaster damage by a small amount”
Survivalist: Corrected the Level 3 description from “Health regeneration starts much faster AND replenish a small amount of health with each kill” to “Health regeneration starts faster AND replenish a small amount of health with each kill”
Bounty Hunter: Corrected the Level 3 description from “High chance to get a Power-up with each kill AND resets cooldown with each kill” to “Medium chance to get a Power-up with each kill AND current cooldowns decreases with each kill”
Bounty Hunter: Modified drop chances and cooldowns – Level 1: 25% Drop chance, Level 2: 50% Drop chance, & Level 3: 50% Drop chance AND 75% cooldown on each kill
Shields: Personal Shield, Squad Shield, & the Blaster Cannon will now deflect and absorb most forms of projectiles; exceptions being the Cycler Rifle, Scatter Gun & Proximity Bomb
Shields: When Personal Shield is active, the player is unable to fire weapons and throw grenades, but can still deploy droids, turrets, & call in Heroes and vehicles
Bowcaster: Updated damage to be consistent across all 3 charge levels – Projectile damage is now 40, Explosion damage is now 33, & the Explosion radius is now 2m
Bowcaster: Lowered max hold time from 5 to 3s
Bowcaster: Now properly goes on cooldown when firing a shot and then quickly entering a turret
Barrage: Lowered fuse timer from 2-2.25 to 1-1.5s
Barrage: Decreased inner explosion radius from 3 to 2m
Impact Grenade: Increased damage from 90 to 100
Impact Grenade: Decreased explosion radius from 2.25 to 2m
Ion Grenade: No longer deals collision damage
Flashbang Grenade: Added a screenshot component to give it an extra disorienting effect
Scan Pulse: Cooldown time increased from 10 to 18s (normal) and 8 to 16s (upgraded)
DL-44: Damage decreased from 19 to 13 at a ranges greater than 40m
Powerups: Deployed Droids and Turrets will now self-destruct after 20s when the owner is defeated
Blaster Cannon: Kills will now count towards leveling Trait Cards
Blaster Cannon: No longer takes splash damage from its own shots
E-Web: Players now correctly take damage when right up against the barrel of the gun
Viper Probe & R5-D4 Droid: Spawn protection decreased from 2 to 0.5s
R5-D4: Now shows the correct health bar color for both teams
Smart Rocket: No longer fires from the center of the player camera, now from the barrel of the weapon
Vehicle Turret: Destroying this will now properly grant you score
Jump Pack: Cooldown lowered from 25 to 22 (normal) and from 20 to 17 (upgraded)
Vehicle Changes
T-47 Airspeeder: Now properly explodes when hitting the ground after a player ejects
T-47 Airspeeder: During Walker Assault it is no longer possible to switch Tow Cable targets during the Tow Cable event
Speeder Bike: Kills with the cannon are now properly displayed
Speeder Bike: No longer takes damage when just outside the edge of the Orbital Strike boundary
AT-ST: No longer takes damage from fire
AT-ST: Changed the max pitch on the grenade launcher
Millennium Falcon & Slave I: Now are immediately destroyed when crashing into the ground while in 1st Person view
DF-9: Laser fire is now visible when angling the turret up
Y-Wing: Players are now properly notified if they are killed by a Y-Wing

General: Misc spawning improvements across various map & mode combinations
General: Princess Leia’s Honor Guard and Emperor Palpatine’s Shocktroopers are limited to only 2 spawns during the Heroes vs. Villains and Extraction Game Modes
General: Players no longer instantly die during vehicle deployment after having taken damage that would kill them prior to the transition
Fighter Squadron: Games will no longer end in a draw when a player that crashes into the ground would have awarded the winning points
Fighter Squadron: Vehicles of equal size will now both be destroyed when colliding regardless if one vehicle is shielded
Hero Hunt: Redesigned the way in which the new Hero is selected, now the top 3 damage dealers have a chance to be the next Hero – Spin the Wheel!
Blast: Re-added Sulphur Fields back into the Blast map rotation
Drop Zone: Altered player count from 16 to 12

General: Fixed inconsistencies with blocking blaster fire between active and passive blocking for Luke Skywalker, Darth Vader, & Emperor Palpatine
General: When blocking blaster fire modified with Explosive Shot or Ion Shot, Luke Skywalker & Darth Vader now deflect and reflect Explosive Shots or Ion Shots back
General: Heroes can no longer fire their weapon while melee’ing
Darth Vader: Increased health from 1500 to 1650
Darth Vader: Block ability time increased from 4 to 8s
Darth Vader: Decreased cooldown of Lightsaber Throw from 7 to 6s
Darth Vader: Increased distance of Lightsaber Throw by 3m
Luke Skywalker: Decreased health from 1000 to 925
Luke Skywalker: Slightly decreased running speed
Boba Fett: Increased the range at which his blaster damage starts to drop off from 30 to 45m
Boba Fett: Increased the range at which blaster damage is at the low end from 60 to 75m