At E3 last week, there was no shortage of VR games on the show floor. Many of the games that were being shown off were single-player experiences. However, there was one multiplayer game that really caught my attention. Ubisoft was showing off a Star Trek game that would finally let us command a star ship, and we’d get to do it in virtual reality.

While I enjoy immersive single-person VR experiences, I think that the technology is almost wasted on these. Virtual reality has the ability to break down the barrier of physical distance and bring people together in the same space. And what can be more immersive than interacting with other characters in the game that behave exactly as you’d expect another human to?

When I saw the trailer for Star Trek: Bridge Crew, I knew that I had to check it out. The idea of playing as a member of a bridge crew on a star ship isn’t exactly a new one. There is another ship simulator called Artemis, which has each person taking on one of the primary roles of the ship.

Now and then I’ll get together with a regular group of friends and play Artemis. I’ll clear out my office and setup several computers, including a tablet for the Captain, and a projector that shows us our front view screen. The current Captain will give orders, and everyone will carry out their specific tasks. It’s a really fun experience, even if it does take a significant amount of work to setup. 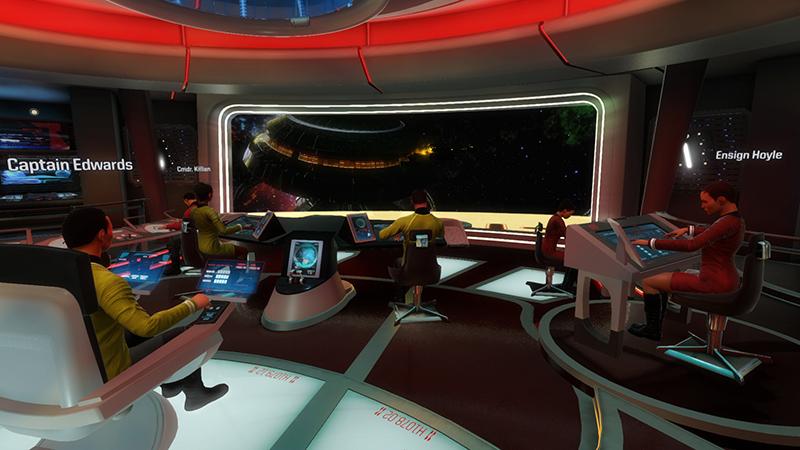 There are a number of issues with Artemis, which can really limit the enjoyment of the game. First, you need to get everyone together in a room large enough to house 3-6 computers. While it’s fun to play in-person, it’s not always easy to do, especially with the space requirements.

The game looks extremely dated, and is rarely updated. With a limited number of missions to run, the game can quickly become a bore if you meet regularly to play. My group has been looking for a similar game that can replace Artemis, and Star Trek: Bridge Crew looks like it could be it.

When I entered the room that would become our starship, I was greeted by two members of the Red Storm team. Red Storm is the Ubisoft studio that is currently working on the game. Hunter Janes, who serves as a Designer and Writer for the game would be the Captain on this particular mission. I sat down at the Helm, while a friend took Tactical, and a stranger was our Engineer.

For the demo we used Oculus Rift headsets with the Touch controllers (which aren’t yet available.) The game will be compatible with both the Rift and the HTC Vive, as well as Sony’s PlayStationVR headset for the PS4.

Captain Janes got us all into our positions and explained that he runs a loose ship, and said that should all just relax and have a good time. He reminded me of one of my Artemis crewmates, so I felt right at home. We each loaded into our own mini tutorial, which explained all of the functions of our position, and what would be expected of us. The tutorial only lasted around 30 seconds, and soon we were on the bridge of the U.S.S. Aegis. 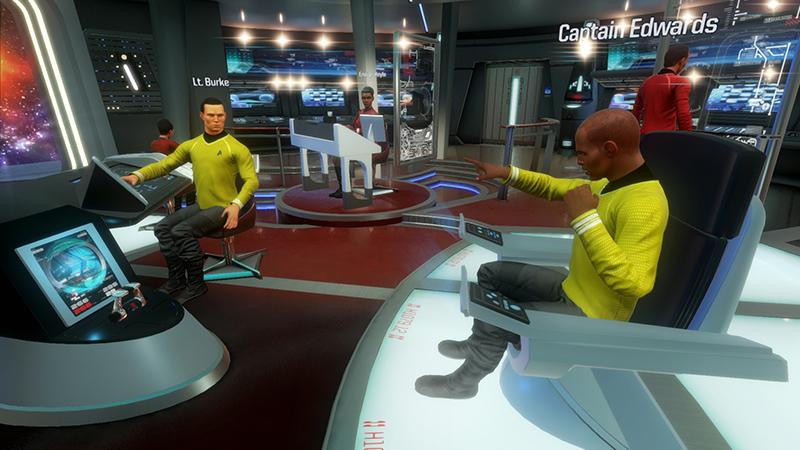 Once loaded in, I could look around and see the entire bridge of the ship, which was similar in fashion to the Enterprise, as depicted in the most recent movies. What’s more, I could see the other three members of the bridge crew, along with one or two NPCs. We could all see each other, and use the Touch controllers to wave, fist-bump, point fingers, and more.

Like other multiplayer VR experiences, being able to see and hear the other players really transforms the experience. Since we were using motion controls to track our movements, the various gestures have a uniquely human quality to them that AI simply can’t achieve. Even the mouths of the avatars moved in sync with what they were saying, to give one more added layer of realism to the experience.

Once we took a moment to get adjusted to our new surroundings (and to goof off a bit) we received a transmission letting us know that we needed to respond to a distress signal in a far off system. I used my Touch controllers to interact with the virtual touchscreen at the helm, to guide us to where we needed to go.

To do this, I switched my interface to the Warp settings, and found the system that needed our help. I tapped on it to plot the course, and was given a launch vector, which I would need point the ship at, in order to get under way. The main viewscreen showed an outline of the vector that I needed to follow, and so I switched my interface back to the Local setting. From here, I could see a representation of the Aegis, as well as any other ships and objects in the area.

On the right were controls for steering the ship on both the X and Y axes. On the left was a slider that would increase or decrease the velocity of the ship, as well as a switch for putting us in reverse. I used these to turn the ship to the appropriate heading, while letting the Engineer know that I’d need power to the warp engines. This takes around 10 seconds to prime, and locks down the other power controls, so you want to prime them just before you’re ready to take off. Once everything was lined up and the engines were primed, I pulled back on a silver handle on my left, and we entered warp.

When we arrived at our destination, we found a terrible scene. A space station had exploded, and the nearby star was about to go supernova. Our mission was to find any escape pods and bring back any survivors. Our Tactical Officer was able to spot the first pod, and targeted it. With this information, I guided the ship to within transport range. Once we were there, the Tactical Officer lowered the shields, and the Engineer began getting a transporter lock on the six survivors, and beamed them safely aboard.

No sooner than they were aboard, we found out that we had company. A Klingon ship de-cloaked not far away, and we prepared to fight. I plotted an intercept course while Engineering re-routed energy to the shields and weapons. Tactical targeted the enemy ship, who was already firing on us, and gave them everything we had. After all, there were other survivors out there, and that star was ready to explode at any moment. 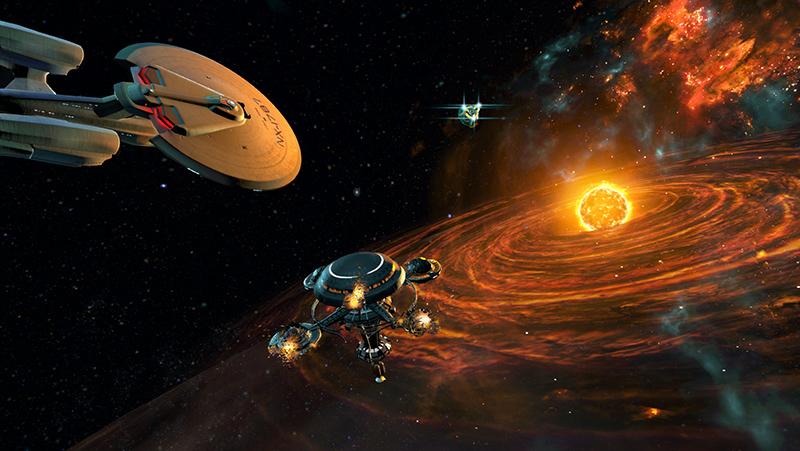 As we fired at the ship, they came around for another pass. They didn’t appear to be breaking off, and since their front shields were down, I pressed forward and rammed them. This might not have been a Starfleet-approved maneuver, but it worked. The Klingon ship was crippled, and broke off their attack. This gave us time to reach the other escape pod, and lower our shields long enough to beam them aboard.

Unfortunately, by the time we reached that second pod, Klingon reinforcements had arrived. We attempted to fight off the second ship, and eventually we were successful. After swinging back around, we made our way to the second pod, and began getting a lock on the survivors. The first enemy ship took this opportunity to hit us hard while our shields were down. We were able to get them all aboard, but just barely.

Our ship was in bad shape, and we received a warning that sun would be exploding in 30 seconds. Engineering put full power to the engines as I plotted a course out of the system. Once the engines were primed, I pulled back on the handle for the warp drive, just as timer counted down to zero, and the sun exploded.

There were yells and screams of triumph as the stars shot into lines, signifying our escape. We had made it, but only just.

Our faithful Captain was just as excited as we were to make it out alive. Apparently in all of the demos that he’s ran, we had cut it much closer than anyone else. And that’s one of the wonderful things about this game. Depending on your crew, you’ll make different decisions on how to handle each situation. I actually managed to play the game a second time with a new crew, and the outcome was significantly different, as different tactics were employed by the other crew members.

Despite only having a relatively short demo, I can already see how much fun the game can be. There will be a campaign mode that will take you through a number of missions that have been written specifically for the game. There will also be a mode where new missions can be randomly generated, to provide an endless number of new challenges. 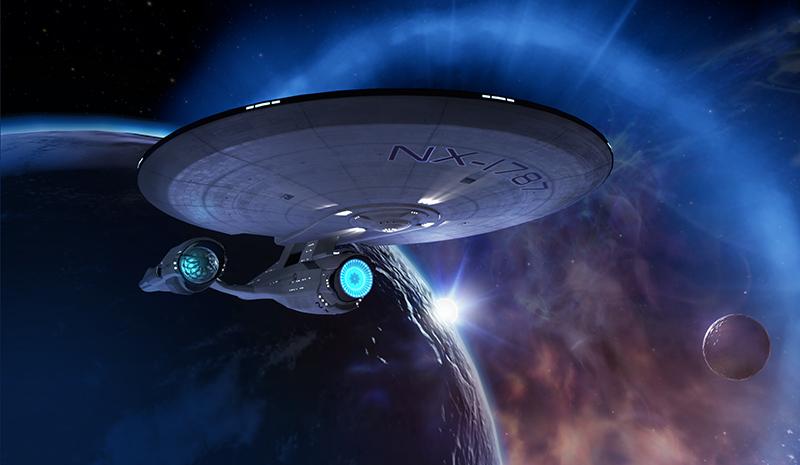 The game is due out on PC and PS4 sometime this fall, and will be compatible with the Oculus Rift, HTC Vive, and the PlayStation VR headsets. While motion controllers are supported, they aren’t required for play. You can still use a controller for all of the game’s functions.