Stanford has a battery that charges in a minute

Batteries. The lifeblood of our mobile devices and ironically also somewhat their Achilles heel. Although the evolution of lithium-ion batteries has made all these portable electronic devices possible, they haven’t really caught up with the growing power that we keep in our pockets. That’s not even considering yet the similarly growing obsession over thinner devices, which would require thinner batteries that deliver the same power. Stanford University researchers, lead by chemistry professor Dai Hongjie, might have stumbled on the answer in a new variant of an aluminum-ion battery.

Cheaper, safer, faster charging. That’s the promise of the aluminum-ion battery that Dai has been working on. This type of battery has already been the focus of many chemists, researchers, and industry experts as the next evolution of batteries. But they have always been foiled by the type of materials to be used, which, in turn, would determine the performance of the battery. Dai says they “accidentally” discovered that a cathode, the positively charged electrode of a battery, made of graphite gave the best performance.

The result is a battery that has many of the ideal properties that a next generation power source could have. It will be cheaper, for one, considering aluminum is a more affordable material than lithium. It is also safer. It won’t catch fire even when damaged, even when you drill a hole in it, says Dai. But perhaps one of the most interesting features is that the battery can be charged at an ultra-fast rate that might even put Qualcomm’s QuickCharge 2.0 to shame. Being able to fully charge it in under a minute means less time hugging walls and more time on the go. Since the battery will be made primarily from aluminum, a side effect is that it can be flexible, which solves one of the biggest hurdles to flexible and bendable mobile devices. Stanford’s version can be last 7,500 charging cycles, which is no small matter considering other aluminum-ion batteries already being worked on only lasts only 100 cycles. In comparison, lithium-ion batteries last for 1,000 charging cycles. 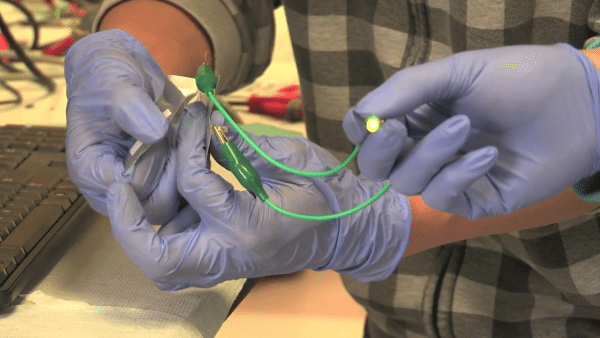 As much as this might sound like a dream come true, Stanford’s aluminum battery is far from ready to become a finished, let alone commercial. product. At the moment, it only gives off 2 volts, which, while does exceed the usual 1.5V of AA or AAA batteries, is still significantly lower than lithium-ion batteries. The energy density also needs to be substantially improved. Currently, it only has 40 watts per kilogram, while lithium-ion batteries range from 100 to 260. Fortunately, Stanford’s researchers are quite optimistic they can reach these goals, which bodes well for our future smartphones and tablets.