It’s no secret that we’re fans of all kinds of tech and gadgets, but we especially hold a soft spot in our hearts for things like this. They’re just fancy, and crazy enough to pique our interest. Of course, if you were to actually put any of these squishy lights in your home, you might get some second glances, or maybe even some dumbfounded stares, but isn’t it worth it? After all, you could probably take some solace in the fact you’d be the only one on the block with them.

These spheres are created from modular silicone, and they’re just squishy enough that we’re sure you’d take a few minutes out of every day to play around with them. The really cool part though, is the fact that these lights react to one another. While you’re able to turn one on by its lonesome, the real illumination happens when you bring more of the balls close together. Hence the reason you’d put them together in the pictures you see, or as luminous trees. They don’t seem to be very tall though, so they probably can’t really light up any significant amount of space. Which is a real shame. 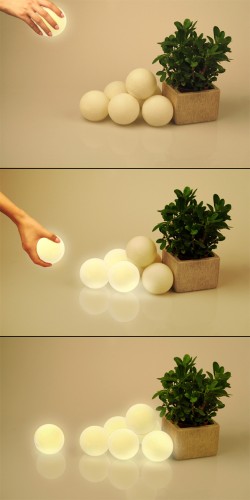 The Squishy Lights were designed by Julien Bergignat. Unfortunately, there’s no word on when these luminous spheres will come to market, and the only word we have on a release marks these things hitting the land of France before anywhere else gets a crack at them. But, they have to be launched somewhere, so the faster the better. Hopefully the French can figure out a great way to use them, so that by the time they make it around the world, we can figure out a better way than making strange piles of glowing orbs in the corner of our room.