What we’ve got right here today is the PREMIUM version of the BETA release of Spotify for Android as it exists right now, here, today, in the United States of America, and we’ve gotta show it to you. Spotify is a music streaming service that’s been active for right around 2 years in the UK and is now blasting forth in the USA with a BETA trial. They’ll have their full service live SOON and what you’re going to find here is the sweetness you’ll be experiencing if you grab the $10 a month Premium service, that is, working on Mobile. Spotify has an app for Apple’s iOS and for Android and they’re very similar – the one you’re seeing here is on an Android.

Before we begin, let me thank the fine folks at Spotify for finally granting us an audience, us poor defenseless colonies with our lack of a perfectly awesome music streaming service like what we’ve got here now – what took you so long?! Now that you’re here, Spotify, I thank you, you’ve got a service that’s about to chop up essentially all the competition here in the states and serve it up for breakfast. You’ve got a $4.99 monthly plan that gives people a month’s access to your desktop-based service, that is, infinite use of the entirety of your massive library of music, or $10 for that and mobile usage of that same library.

Save some of it for offline use or stream it all! Make sure you’ve got infinite data on whatever plan you’re on, folks, and let’s go!

What have we got here?

It’s an application for the music service known as Spotify. What Spotify has is a massive music library which you can basically rent the use of anywhere you’ve got internet. You can choose one plan for $5 a month that’ll give you this service inside your home or on your laptop, or you can pay $10 a month and have that as well as access on your mobile devices – this is what we’re looking at now.

When you open the app, you’re brought immediately to your Playlists. This is a screen that shows all the lists of music tracks that you’ve made in the past along with the music you’ve got physically on your device, tracks you’ve starred as your favorite, your library of tracks showing everything you’ve put on a list in some way or another, and your inbox. Each of these options brings you right to the music. 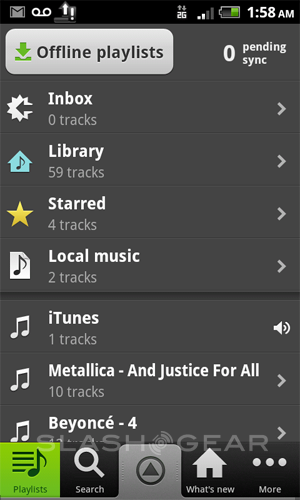 There’s a button designated Offline playlists which brings you to your lists of songs with the option to download copies of them for offline usage, this being really quite helpful for you users of mobile devices in low-coverage areas or if you’re worried about going over your monthly data usage cap. There’s also a meter which tells you how many transactions, or “syncs” you’ve got going on, and a few options at the bottom of the screen.

At the bottom of the screen you’re able to access search, hit a What’s New button, or hit a More button which will bring you to Settings, About, and Logout. The big gray arrow in the center bottom of the screen leads you directly to the track you’ve got playing – drag it up!

Basically no matter where you are in this app, you’ve got access to the “now playing” screen with the album cover of whatever music track you’re listening to, a slider showing you how far into the track you are, and some next, back, and play/pause buttons in the middle bottom. To the right and left of these are a star and an i. The star adds the track to your Starred Tracks list in your Playlists.

The i button leads you to information about the Artist, has a link to a list of all the songs by the artist you’ve got in your library, and you’ve got the ability to star shuffling songs from here, repeating this track, and adding this track to an existing playlist – we’re hoping for a “new list with this track” option soon. 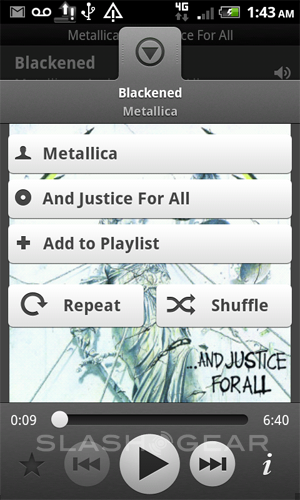 Inside the information about the artist, you’ll be able to see some excellent biography paragraphs, another list of the songs you’ve got that they’ve made, and a link to Top Hits made by the artist that are available from Spotify. All of this appears and acts severely well thought out, planned, and executed. 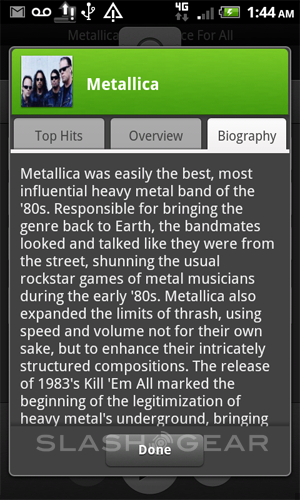 FUN TIP: swipe the album cover left or right to access the next or previous track. This is the most appealing visually when you’ve got a playlist of many different albums, but works on a single album too. 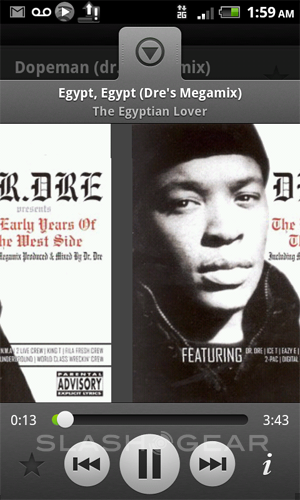 Another important bone in this body is the playlist. It’s here that you’ll create the lists of music you’ll want to access later, same as you would on any other digital music service, but here with a set of options that include the following: you’ve got the ability to “star” each track from this list, and you’ve got the ability to tap a track to begin playing that track and get into the Currently Playing screen. 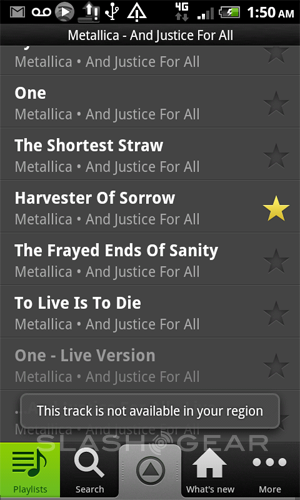 These lists are created to show you the information you need and nothing more, starting with the title in bold and in white above the artist and the album in a slightly darker gray, nearly the darkest behind this text for each track’s box, another darker gray for the empty star holes, and the darkest gray reserved for the top bar and the bottom set of shortcuts. The top bar displays the playlist title, the bottom is the same as we discussed above, with Playlists, Search, Arrow leading to Current Track, What’s New, and More. 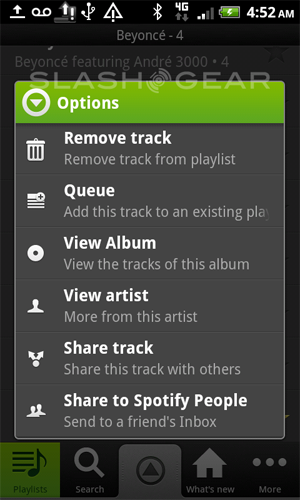 FUN TIP: Long-press a track in a playlist to access all the options for that track you’ve ever dreamed of! You’ll see Remove Track, Queue, View Album, View artist, Share track (with people outside of Spotify using your own compatible services,) and Share to Spotify People. This last option connects to your Inbox, the same Inbox that was mentioned above as being part of Playlists. I smell social interaction of a very giant kind.

The option to the left of the Current Track option is What’s New, a shortcut which leads you to three tabs, the first of which is What’s New. This is a list of all the newest albums to be released on Spotify. You’ll notice some gigantic names already, many of them with albums that’ve VERY recently released these albums to stores. Beyonce! I just saw you in Target, what are you doing here, do we shop at all the same stores?! I love your album 4, which just so happens to be on Spotify, conveniently! 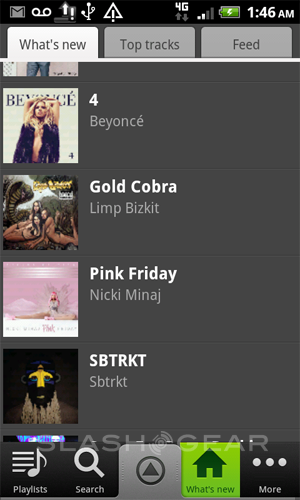 Next is Top Tracks, this being the tracks most selected on Spotify. You’re going to see the same list you’d see on pop radio if you listened to pop radio: Rolling in the Deep by Adele, Last Friday Night by Katy Perry, and The Edge of Glory by Lady Gaga. The long-pressing of a track tip works here, too, share and save away! Finally there’s Feed, this being a place where the Spotify team can send you, the power user, all sorts of insider information that you’re going to just love to know. 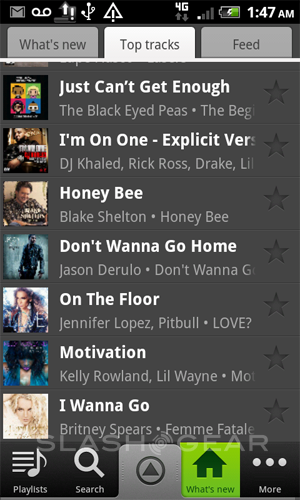 The Spotify team appear to have run into some interesting dilemmas while they were working with the UK population, because this is a really rather complete settings page – I can tell without even having used this app for a super extended period. You’ve got the ability to push Spotify offline, no questions asked, you can choose to only sync over Wi-Fi, only sync over 3G, or both, and you can choose which bandwidth you’d like to use to stream. You can also choose to sync only in the highest quality if you wish, you can scroble your information over to last.fm, and you can clear out your saved data altogether with a simple button press. 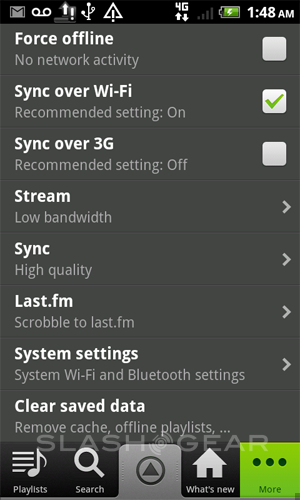 Whoa, last.fm – the collaborations begin here! We’re wondering how many groups will work or clamor to work with Spotify now that it’s going to explode all over everyone’s face in the USA – Twitter, Facebook, Google+, we’re looking at you! There’s also a couple of System Settings down at the bottom past a shortcut, one of them giving you the ability to change your Wi-Fi settings, the other allowing you to change your Bluetooth settings. Both of these literally shortcut you to your own basic Android settings for the whole device, not just this app. 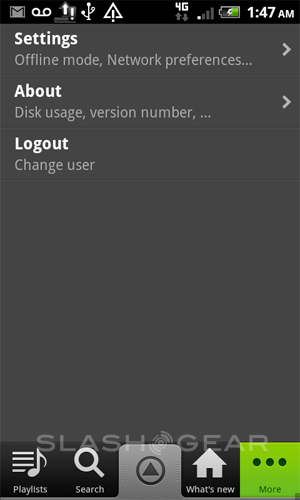 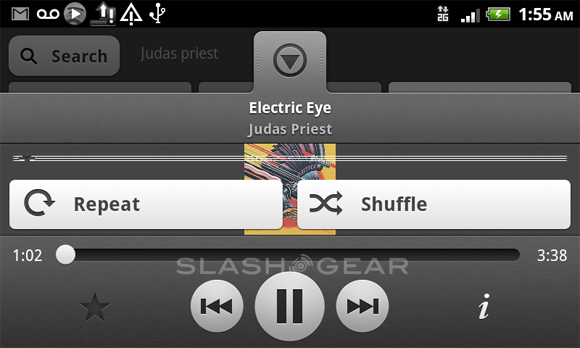 While this app certainly does work just fine in landscape mode, we’re gonna go ahead and suggest you go for the portrait mode at all times. That said, the landscape mode of every screen may not be pretty, but it works really well. The user interface hasn’t been sacrificed anywhere other than a couple tiny areas we’re certain Spotify is working out with their developer team now. 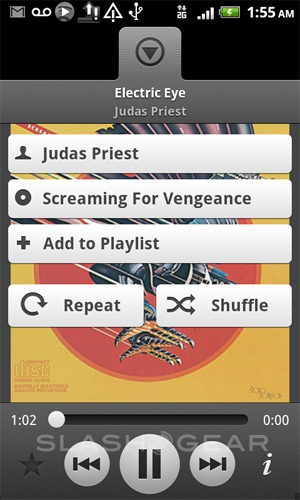 I’m almost embarrassed at how nice the music sounds, and I’m talking about streaming the music Spotify has in their library, and at all times, not just when I’ve got some magical 4G connection. One of the devices I used most when testing this app out has been the myTouch 4G Slide, a T-Mobile device that should be connected, if the maps are right, to T-Mobile’s 4G network here in Minnesota all the time. It does, however, occasionally turn down to 2X instead of 4G. Spotify doesn’t care, it just eats that 2X for breakfast, look at it go! That’s not to say that you can’t continue to use your device while you’re playing music at the same speed you’d have been going without the app open and working, also nay. Do it all!

It appears that whoever Spotify has working for them in the interactive design department also designed sliced bread, because using this app is EASY. And it’s not just easy, it’s enjoyable. You can play all your favorite music and you WANT to play all your favorite music, too. Much in the same way Google is experiencing a major influx of interested and extremely willing to participate participants in its Google+ social networking project, so too will Spotify pick up a pack of ravenous fans here in the states. It’s basically inevitable, so says I. It all comes down to how “exclusive” the Spotify team keeps the whole system AND how well they advertise on all circuits. 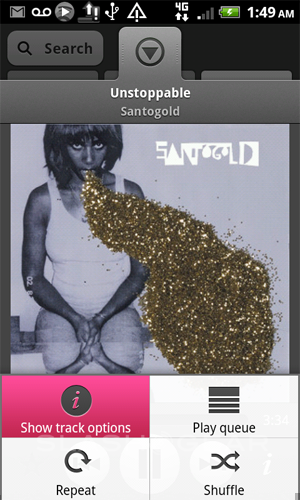 I’ve got a car stereo with an audio jack that allows me to plug my Android device in with style and grace. Now that I’ve got Spotify, I have the entire WORLD of music at my fingertips. In the short time I’ve had the chance to enjoy this fabulous service, I’ve only come across a couple rare tracks that weren’t a part of Spotify’s library. MOST of the artists and albums I enjoy are sitting right here at the other end of this devices’s internet, and now I can play them wherever.

This service takes the cloud, fills it with music, and carves out all the effort. This service, if everything we’ve seen thus far continues at the same quality and delivery, is more than worth the cost of the premium account. Believe it!

You can purchase Spotify for yourself now at Spotify.com/US/Hello-America/