Spotify for iPhone received a healthy update today, and it now comes with the music streaming service’s new Discover mode that allows the app to recommend new music to you based on your listening preferences and playlists. Furthermore, the app also has a new Now Playing view, as well as a new icon (if the previous icon was looking a little boring on your iPhone home screen).

The new Discover tab shows up in the left-hand sidebar when you tap on the three-lined button at the top-left. Tapping on Discover will provide you with a scrollable list of music that you may like based on what you’ve listened to in the past. For instance, Spotify may say, “You recently played Jay-Z. You might like this album,” and point to a similar album that you can save as a playlist right from the Discover tab. Or if it’s a song, you can tap “Play Next,” to have the song automatically be the next song to listen to.

The new Now Playing view has also changed slightly as well, in the sense that the app doesn’t immediately close playlist or a search when you start a song, and you can easily tap on “Hide” to go back to the last page you were on and have the song keep playing in the background. 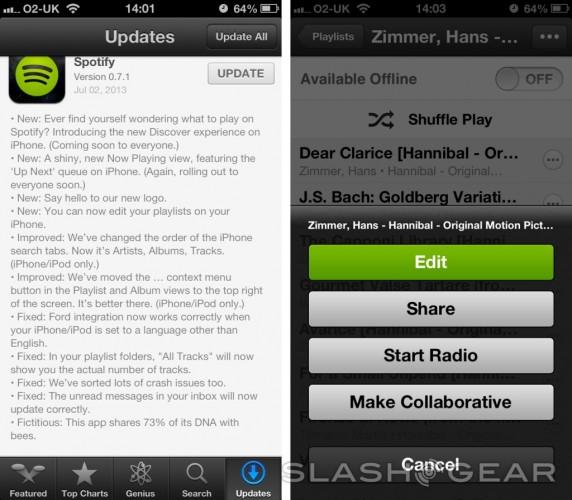 Furthermore, Spotify users can finally edit their playlists on their iPhones — a feature that we’ve long been waiting for. The new icon also features a new look that’s more in line with iOS 7, featuring a black background with the round Spotify logo in green in the center. It’s definitely a slightly more flattened look that’s all set to go for when iOS 7 releases later this fall.

However, one feature that we have still yet to see is the ability to sort playlists by different attributes, such as the artist’s name, song title, album, etc. Playlists are still sorted by when they were added by default, which leaves older songs at the bottom of playlists, instead of showing up alphabetically. The Spotify iOS app update is a big step forward, but we still feel that there’s a lot more to add.