It’s well known that Apple takes a 30% cut from all app purchases on the iOS App Store, and that fee is also applied to in-app subscriptions. So apps like, say, Spotify, the primary rival to the new Apple Music service, must hand over 30% of what each users pays when subscribing to the service directly on their iPhone. See where this is going? Spotify hopes you do, as they’ve begun encouraging users to switch their subscription over to the website in exchange for saving $3 per month.

When Spotify users sign up for the service through iOS’s in-app subscriptions, they agree to pay $12.99 per month. But if users choose to subscribe at Spotify.com, they only pay $9.99 a month for the exact same service. Spotify’s email request to customers includes instructions on how to turn off the App Store’s auto-renewal, and then migrate their account to the website. 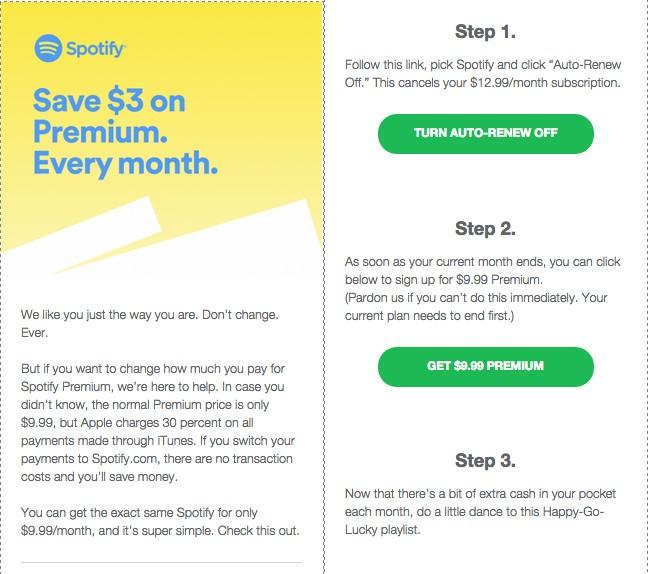 Spotify is likely trying to highlight the fact that their service is the same monthly fee as Apple Music, as long as users sign up with them directly. The more expensive App Store subscription price means Spotify looks pricier compared to Apple’s new offering, when in fact they are trying to make up the difference of Apple’s 30% cut.

Apple’s App Store rules specifically state that apps are not allowed to directly link or direct users to an external sign-up form. Emailing subscribers directly and telling them how they can save money allows Spotify to get around that policy.