About two years ago, DARPA and Boston Dynamics unveiled the gigantic and strange-looking BigDog, a quadruped robot that was intended to be a pack mule of sorts and engineered to walk on any type of terrain. Now Boston Dynamics is revealing Spot, which might as well be named as MediumDog, because LittleDog is already taken. Although also a quadruped, it is substantially smaller in size and was designed for use both indoors and outdoors, able to overcome any sort of terrain, even stairs. And yes, you can kick it too and it will pick itself up.

Although it is less creepy looking than BigDog, you won’t be mistaking this robot for a loving and lovable pet. Unless you actually go for that kind of robot love. It’s smaller frame and more industrial looking design works well in selling the robot as an indoor machine, perhaps for carrying lighter loads between rooms or floors. 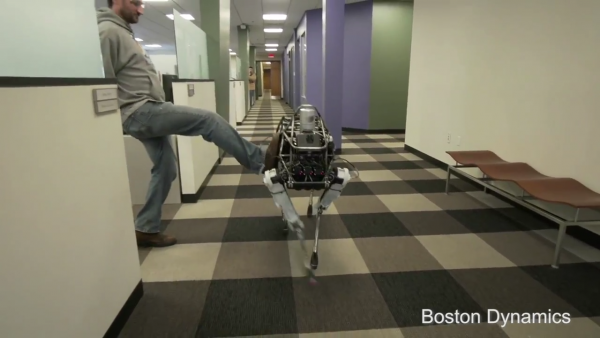 The highlight of Spot, however, like its larger BigDog sibling, is in its ability to walk on its own. Whatever the kind or angle of terrain, Spot will be able to negotiate its way through it. Like BigDog, it’s legs are electrically powered and actuated by hydraulics and has sensors that help it navigate. And just to prove that point, you can kick Spot as hard as you can, if you can kick it hard at all, and it will correct itself quickly and stand right back up.

Spot weighs only 160 lbs. so it’s unlikely to do the same heavy lifting that BigDog is capable of. Boston Dynamics has not yet revealed what purpose the robot will serve aside from learning and experimentation. Will it become a robotic household pet? It may have the name but it definitely doesn’t have the looks to sell it off.