Today is a big day for SpaceX. After a successful test fire of its Falcon Heavy rocket back at the end of January, SpaceX is ready to launch the bad boy into space. This is big for a couple of reasons, but mostly because this is one of the most powerful rockets to be sent into space in quite some time.

In fact, the last time we saw a rocket of this size and with this kind of power supporting it was when NASA was launching its massive Saturn V rockets back in the 1960s and 1970s. Like those Saturn V rockets, the Falcon Heavy is intended to take humans outside of low-Earth orbit, to the moon and perhaps one day to Mars.

Today’s flight, of course, won’t have any humans onboard. Instead, the payload for the Falcon Heavy’s maiden launch will be Elon Musk’s cherry red Tesla Roadster. Obviously, since this is the first test flight for the Falcon Heavy, there’s a lot to go wrong, and given the incredible amount of thrust the rocket is capable of – 5 million pounds, to be exact – there’s the potential for everything to go up in flames before the rocket exits our atmosphere.

Above, you can see an animation of how the Falcon Heavy launch will play out, assuming everything goes as planned. We’ll see the rocket lift off with each of its three thrusters landing back on Earth. Once the capsule makes it into the space, Musk’s Tesla Roadster will be released into the void, eventually entering an elliptical orbit around the Sun that’s similar to that of Mars.

Tesla, of course, will livestream the whole event, which you see embedded above. That stream will go live on YouTube at 1:30 PM, but of course, there’s more to this event’s schedule than just the launch itself. The whole thing will take place over the course of just about two hours, with an hour and a half of devoted to pre-launch preparations. Michael Baylor posted SpaceX’s full schedule over on Twitter, giving us an idea of what to expect. 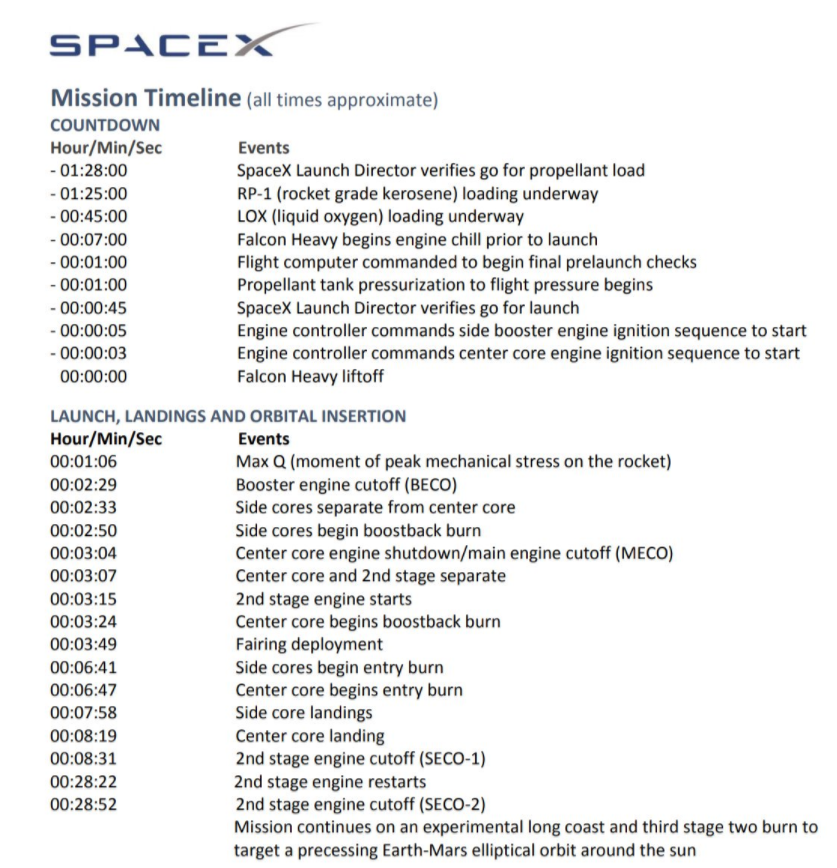 Make no mistake: this is a big launch for SpaceX, and one that a lot of people will be watching. With the potential for so much to go wrong on the Falcon Heavy’s maiden voyage, it’ll be very fascinating to see if SpaceX can pull it off without a hitch. Doing so could mean great things for the company’s ambitions concerning manned missions to Mars, so be sure to tune in if you can.

Update: SpaceX has delayed today’s launch to 2:20 PM Eastern, citing unfavorable winds in Earth’s upper atmosphere in a post to Twitter. We’ll see if the launch is hit with anymore delays, so stay tuned.

Update 2: Elon Musk says on Twitter that SpaceX is now targeting a launch for 3:45 PM Eastern. In a separate Twitter post, Chris Gebhardt with NASASpaceFlight.com notes that there are currently “no constraints” on the launch, meaning wind conditions in the upper atmosphere have improved. Let’s hope it remains that way as we head toward Falcon Heavy’s new launch time.