The left engine of a Southwest airline jet blew “shortly after takeoff” this afternoon, resulting in an emergency landing in Philadelphia. Initial reports suggest that 8 passengers were injured and one passenger died as a result of the incident.* The plane was a Boeing 737-700 and has successfully landed as of the posting of this article.

A single engine on Southwest flight 1380 had a catastrophic failure minutes after takeoff from New York Laguardia. Shrapnel from the engine hit the side of the plane, resulting in a broken, then blown window. One woman was partially blown out of the window, but was pulled in by several nearby passengers. Below you’ll see an Instagram post by Amanda Bourman, an apparent passenger on the flight, with a photo of the blown engine in tow. Bourman had some additional details on the incident.

*The single death in the flight was reportedly due to a heart attack. This was apparently not the same person as was partially blown out of the one fully broken window in the flight as result of the blown engine. At this time the condition of the window woman is unknown.

Our engine that blew out at 38000 ft. A window blew out, a man saved us all as he jumped to cover the window. Unfortunately we lost a passenger to a heart attack. The pilot, Tammy Jo was so amazing! She landed us safely in Philly. God sent his angels to watch over us. I actually heard someone say, there is a God!! #southwest #flight1380 #godsenthisangels #anotherdayofgrace

Several photos in this article were captured by a Marty Martinez, an apparent passenger on the flight. Above and below you’ll find two separate photos captured by two different passengers, likely as they exited the flight on the tarmac in Philadelphia.

What a flight! Made it!! Still here!! #southwest #flight1380 pic.twitter.com/Cx2mqoXVzY

The blade containment ring on the engine seems to have done the job it was intended for, as evidenced by the several photos of the engine shared post-landing this afternoon. Despite catastrophic failure of one full engine, the plane kept flying, and landed, and – again – the only death was a heard attack. 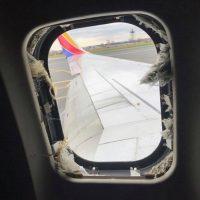 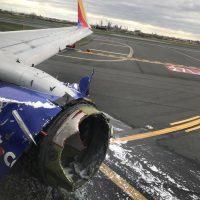 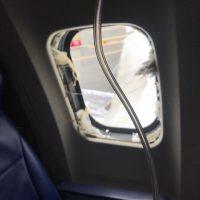 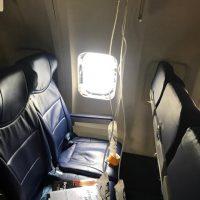 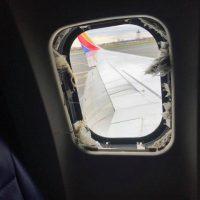 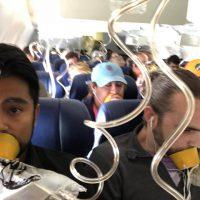 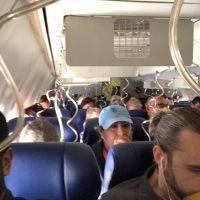 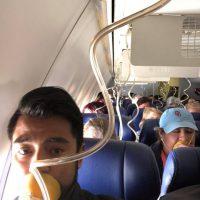 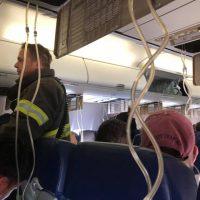 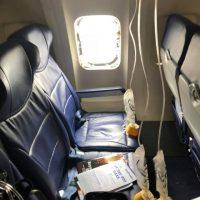 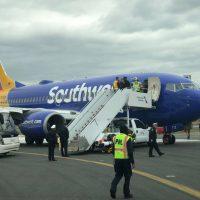 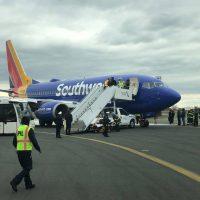 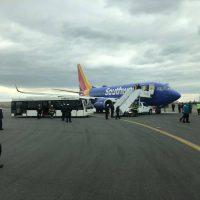 Southwest Airlines posted the following note this afternoon to their social channels.

“We are aware that Southwest flight 1380 from New York La Guardia (LGA) to Dallas Love Field (DAL) has diverted to Philadelphia International Airport (PHL). We are in the process of transporting Customers and Crew into the terminal.

The aircraft, a Boeing 737-700, has 143 Customers and five Crewmembers onboard. We are in the process of gathering more information. Safety is always our top priority at Southwest Airlines, and we are working diligently to support our Customers and Crews at this time.”

Of particularly important note: The pilot and crew of this flight, by all accounts thus far, seem to have acted in a calm and professional manner as the incident occurred. The pilot was Southwest’s Tammie Jo Shults. Schultz landed the flight without incident beyond the initial impact of the blown engine. Well done, Schults.

UPDATE 2: A Southwest statement was sent out this afternoon confirming the single death onboard the flight.

UPDATE 3: According to the USA’s National Transportation Safety Board, “NTSB is sending a go-team to Philadelphia, PA to investigate the Southwest Airlines engine incident on April 17, 2018.” Two hours after the initial announcement, NTSB_Newsroom relayed the following: “The NTSB Go Team has arrived on scene in Philadelphia for the investigation of the Southwest engine failure.” That message was posted at approximately 4:15 PM Central Time.