Efforts to make Caller ID more useful – and more trustworthy – aren’t stopping at the nationwide rollout of STIR/SHAKEN, with a new push to include company logos on your phone’s screen. Get ready to hear plenty from carriers about Rich Call Data (RCD), which combines Caller ID with anti-spoofing authentication to make it more obvious at a glance who’s calling you.

Caller ID may have started out as a convenience feature, but its usefulness was rapidly diluted when spam callers figured out how to spoof the number. Even though your phone might say it’s your bank, airline, or a company like Apple or Microsoft ringing, the reality can be very different. Each year, many thousands of people fall for scams because they trust the person calling is indeed who they claim to be.

STIR/SHAKEN is one way the US Federal Communications Commission (FCC) is trying to tackle that. The system basically authenticates all stages of a phone call, from the originating network (i.e. that of the person making the call) through all the hops in-between, to the delivery network (i.e. your carrier, receiving the call). By maintaining that path of accountability, it reduces the likelihood of a spoofed Caller ID showing up on your phone screen.

The FCC announced earlier this month that the largest voice service providers in the US had all activated STIR/SHAKEN – which actually consists of two standards, Secure Telephone Identity Revisited (STIR) and Signature-based Handling of Asserted Information Using toKENs (SHAKEN) – to “sign” legitimate calls. The next step there is for smaller carriers to get onboard, something the FCC says it’s considering accelerating the deadline for. 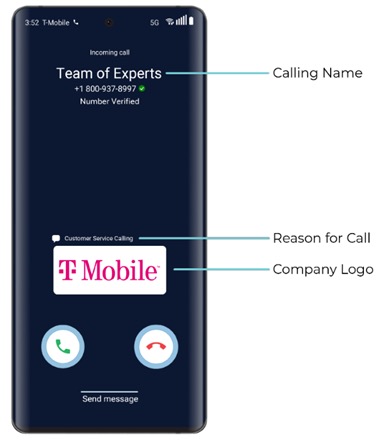 At the same time, though, efforts are underway to tap that validated Caller ID and make it easier for people to see at a glance who is calling. Rich Call Data is part of the framework for STIR/SHAKEN, and allows the originating caller to choose a logo – probably a familiar brand – that will show up on the Caller ID screen along with their name. So, if Apple is calling you, the Apple logo might show up on your lock screen as well.

It taps the SHAKEN system, and specifically is part of the Identity token. While logos appearing on Caller ID have been used before, they typically rely on the device comparing the number to a database of companies to decide what to show. RCD, in contrast, allows the caller to choose the branding. It’s pulled from a database managed by Registered Caller, organized by the CTIA wireless industry trade association.

If the STIR/SHAKEN authentication isn’t satisfied, the logo or branding won’t be shown.

It’ll take a little while before we start seeing this on our phones, of course. T-Mobile has recently demonstrated a proof-of-concept, announcing what it says is believed to be the first example of RCD in action. However there’s no timeline for when it might start rolling the feature out to subscribers.