Sony’s new smartphone CMOS image sensor has its own DRAM

Engineering and manufacturing today has gotten so good that it has become possible to cram as many things in such a small space. Take, for example, our smartphones that have enough processing power to handle many of the things that low-end laptops are able to do in such a small space. That combination of small size and big power is what made smartphones such a huge threat to digital cameras, especially the point-and-click variety. Now Sony is taking that game to the next level by revealing a 3-layer BSI CMOS sensor for smartphones that, thanks to modern technology, packs its own DRAM inside.

RAM, short for Random Access Memory, is a type of high-speed but volatile data storage that is often associated with processors and computers. But Sony is now exploiting the benefits of that technology to improve the speed of image sensors. And not only that, it has managed to squeeze that in the size of a sensor that will fit inside a smartphone.

One will naturally ask what’s the point in having DRAM or Dynamic RAM inside an image sensor. The purpose of RAM is to increase the data readout of the image sensor, considering RAM is one of the faster types of data storage and access technologies that is still within most budgets. In this particular context, the DRAM is sandwiched between the BSI (Backside Illuminated) structure of pixels above and the circuit layer below that handles signal processing. 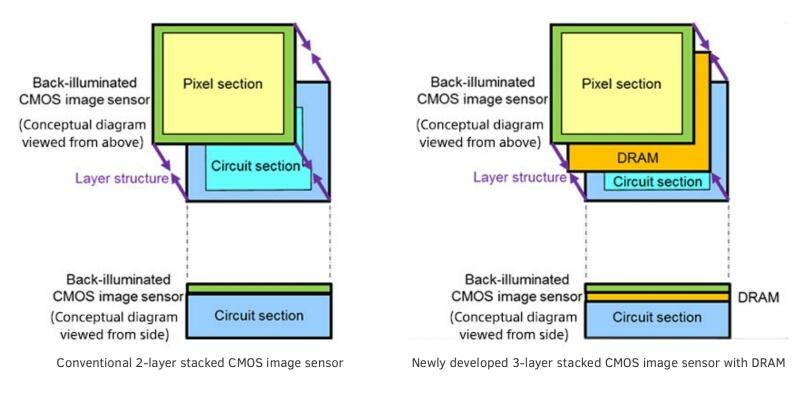 The DRAM thus acts as a sort of holding area that can quickly read data coming into the sensor that can then be passed on to a slightly slower processor down the line. In practice, this means that the sensor can capture the same amount of pixel information at a fraction of a second. Specifically for this sensor, it means 19.3 million pixels can be recorded at just 1/120th of a second, compared to the similar amount that requires a 1/30 second exposure. This also means that the sensor can do super slow motion capture at 1,000 fps even at 1920×1080 (Full HD) resolutions.

The sensor itself boasts of 21.2 effective megapixels and is capable of recording 4K video at 60 fps or 240 fps for Full HD. The sensor’s DRAM capacity is 1 Gigabit, practically 125 MB. Sony has not yet revealed when the sensor will actually land inside a smartphone, but it wouldn’t be far-fetched to expect it in an Xperia flagship later this year.