Sony’s Action Cam, a hands-on with the ‘splash proof’ shooter

Sony unveiled a neat little camera today, and we’re not talking about the 4K Camcorder. This one continues to take aim at an existing market, but has a few interesting features that only Sony could bring. Their new Action Cam is a tiny shooter, much like the ubiquitous GoPro. Sony’s latest takes a page from a few other books Sony is known for writing, and is incredibly light.

The Action Cam is encased in a handsome white plastic, which Sony notes is “Splash Proof”. They didn’t exactly tell us to go under a waterfall with it, but they’re not saying we can’t get caught in a drizzle. It can record up to 1080p, though 720p is much more the wheelhouse for this one. It ups the ante with a 13.5mp lens, too.

There is also a wrist accessory for the Action Cam, which allows for remote shooting and viewing. If you’re one to sport a helmet cam, this neat little feature is one you’ll want to look for. Sony is also asking your dog for help, as they have a dog harness for the cam. Ever wondered what it was like to play fetch with yourself? Sure you have. As the latest model is naturally waterproof, it can also attach itself to a tripod without the need for an adapter. 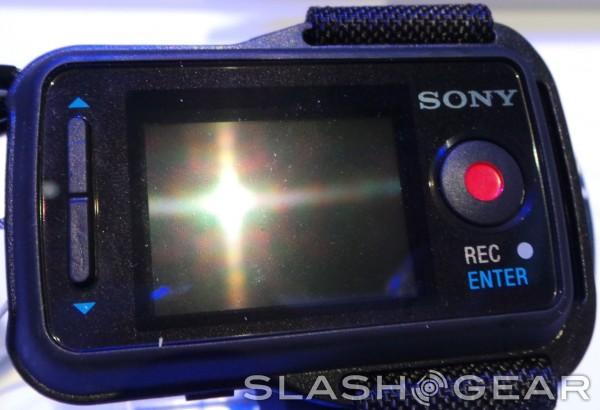 We can’t get over how exceedingly light this one is, and we like the focus Sony put into the refresh. It has just about everything you could want in a camera of its ilk. Though it felt a little light when comparing it to others like it, we can’t say it’s compromised in any way.