It isn’t unusual for OEMs to implement features not found in stock Android exactly because they want to offer an experience that plain Android just can’t. Eventually, Android does catch up, adding those features and causing OEM chanegs to be redundant. Sometimes, however, Android’s official version doesn’t exactly replace sometimes more useful alternatives. That was apparently the case when Sony removed STAMINA mode from its devices running Android Marshmallow in favor of Android’s new Doze feature. After no small amount of complaints, the latest update brings it back for the Xperia Z5 family.

Sony loves to boast about the two-day battery life of its smartphones, no matter how power-hungry theirs specs are. That’s actually only true if you activate the device’s STAMINA mode, which is practically a low-power state where unessential apps are forced to close and hardware usage is kept to a minimum. It has become a favorite feature among Sony fans and other OEMs have also followed suit with their own Power Saving feature, or even Ultra Power Saving Mode in Samsung’s case.

It’s popularity is the reason why those same fans were shocked when the feature disappeared after upgrading their devices to Android Marshmallow. The reason for this was to give preference to the upstream, that is, vanilla Android, feature called Doze, which also offers some amount of battery saving. However, the two features are not exactly similar. Doze only kicks in if the device has been idle and immobile for a certain period of time, regardless of remaining battery life. STAMINA mode, on the other, can be activated under various conditions and have more options. 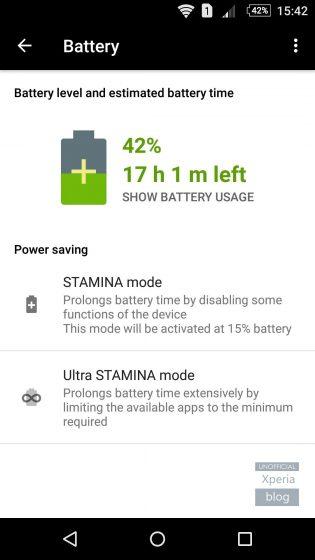 Perhaps seeing the light of reason and due to popular demand, the latest Android 6.0.1 update rolling out to Xperia Z5 devices brings back STAMINA mode, which can work in conjuction with Doze anyway. The update also brings other fixes, like security patches from April, and features like launching the camera app by pressing the power button twice. So far, only the Xperia Z5, Xperia Z5 Dual, and Xperia Z5 Compact have been confirmed to receive this firmware update. The Xperia Z5 Premium is most likely to follow soon.

It will be interesting to see if Sony will retain STAMINA mode in Android N. The upcoming version of Android does include an improved Doze that shortens the required idle time, putting it on par with other power saving features. Given the outcry following the removal, however, Sony should probably let the feature be for now.