Sony’s latest LCD display isn’t going to revolutionize your desktop or home entertainment experience, but it might just blind you if you surreptitiously check your phone in bed. The 3-inch White Magic panel doubles brightness by adding a fourth, white pixel to each RGB cluster: that pixel – along with some image processing tech – can be used to boost outdoor visibility or, in a power saving mode, provide regular LCD performance but at half the energy draw.

While adding a white pixel to boost brightness has been attempted before, it usually results in a loss of picture quality Sony says. By coupling the extra brightness with signal processing, the WhiteMagic panel can dynamically tweak the display to suit whatever’s on screen, balancing brightness and detail.

The two picture modes make the WhiteMagic panel ideal for cellphones or digital camera preview displays, Sony reckons. Both classes of gadget are often used outdoors – where screen visibility is essential – but also benefit from anything that reduces battery drain, such as the low-power mode. The VGA 640 x 480 resolution is probably a little low for smartphones, though we imagine Sony could use the same white pixel concept for higher-resolution panels.

Sony expects the panel to go on sale in October this year, priced at 5,000 yen ($65) per sample unit. No word on when we can expect the first products adopting the technology to show up, but we’d be very surprised if Sony’s CyberShot camera team wasn’t looking on with great interest. 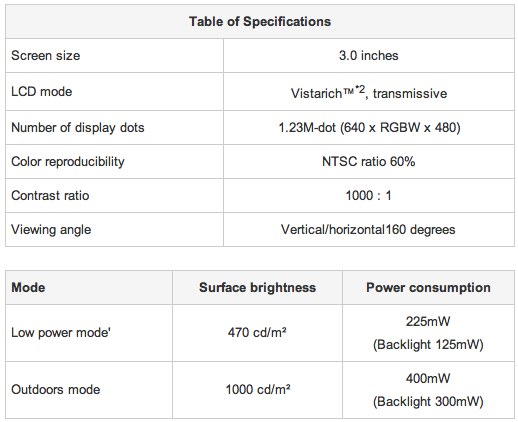