More and more people may be relying on their smartphones for portable entertainment, but Sony isn’t willing to leave even a shrinking PMP market to Apple’s iPod, hence the new E-Series Walkman range. The Walkman E580 and Walkman E380 each support music, video, and photo playback, with the E580 having a 2-inch display and a battery good for up to 77hrs of use, while the smaller E380 scales it down to 1.77-inches of screen and up to 30hrs of runtime.

The Walkman E580 – effectively an iPod nano alternative – comes in 8GB and 16GB capacities, good for up to 3,700 tracks. It will play MP3, WMA, Linear PCM, AAC, HE-AAC, FLAC, and Apple Lossless audio, and AVC, MPEG4, and WMV 9 video, and comes with a set of MDR-NC31 noise-cancelling earphones.

They work with Sony’s own Clear Bass, Clear Stereo, and Clear Phase digital processing, as well as “Virtualphones Technology” (VPT) which is basically the company’s attempts at modeling different environments, such as a recording studio or a club.

As for the Sony Walkman E380, that’s the smaller version, coming in 4GB and 8GB capacities for up to 1,950 tracks. It’ll play 4hrs of video, though only supports WMV 9; audio support misses out on the HE-AAC, FLAC, and Apple Lossless of its bigger sibling. 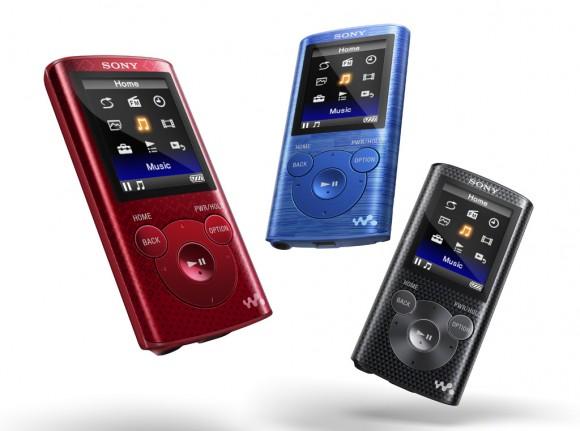 It also gets a more mundane pair of bundled headphones, though Sony does at least throw an FM radio inside. Listeners also get the Clear Bass and Clear Stereo processing.

Both the Sony Walkman NWZ-E580 and Walkman NWZ-E380 will go on sale in Europe later this month, with pricing yet to be announced.