Sony have outed their latest VAIO Z-series ultraportable, and for once there’s no compromise between weight and performance.  Two new models are on offer – the VAIO VPC-Z11Z9E and the VAIO VPC-Z11X9E – with 2.66GHz and 2.4GHz Intel Core-i7 processors respectively and NVIDIA GeForce GT330M 1GB GPUs; they also have Quad SSD drives (in RAID 0 format), offering 256GB and 128GB of speedy storage respectively.

In fact Sony have basically thrown the works at the new laptops: the Z11Z9E has a 13.1-inch 16:9 1920 x 1080 Full HD display (the Z11X9E “makes do” with a 1600 x 900 panel), there’s an integrated DVD burner, 3G and up to 6GB of DDR3 memory.  Sony have also thrown in an automatic graphics system which intelligently switches between performance and stamina modes depending on what the system is being asked to perform.

Despite the specs, each is only 32.7mm at its thickest point, and they tip the scales at 1.43kg with the standard battery.  Both the new VAIO Z-series laptops will arrive in March 2010; Sony is yet to reveal pricing. 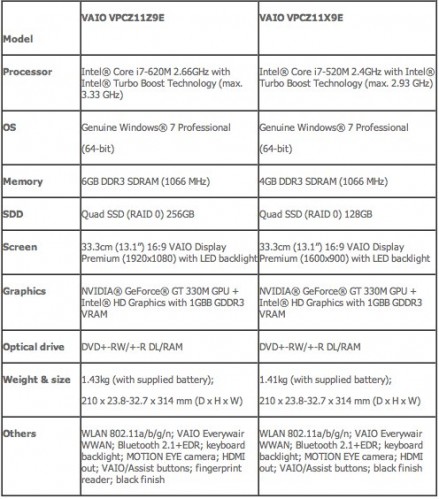