To many, the war of the eReaders is between Amazon and Barnes and Noble. Though Sony has never managed to get quite as big as either of those two companies in the eReader space, it’s back with a new Reader and looking to become a serious contender. Does Sony’s Reader PRS-T2 help the company stand out in the bigger picture, or does it fall flat in a sea of eReaders vying for your attention, and more importantly, your dollar? Read on to find out.

The Sony Reader PRS-T2 sports a 6-inch pearl E Ink touchscreen, and like nearly every other eReader out there, one of the big draws of the screen is that you can read it in direct sunlight. The screen actually looks great when it’s in direct sunlight, and it looks just as good when you take it indoors. The goal behind E Ink displays is to make it feel like you’re reading the page of an actual book, and the Reader PRS-T2 definitely succeeds in that respect. Reading on this is a pleasure – the text on the screen is always nice and sharp, and as an added bonus, Sony has cut back on screen flashes with this latest in the Reader line. Instead of flashing every time you turn the page, the screen flashes once every 15 page turns. Ghosting can sometimes be an issue as a result, but really it isn’t something that’s noticeable all the time. Most likely, you’ll be too absorbed in the book you’re reading to notice, as it isn’t enough to actually make reading any more difficult. 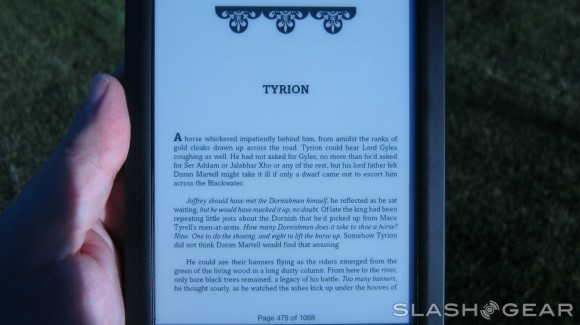 Having touch capabilities is a nice feature, letting you turn the page by swiping the screen instead of using the physical buttons that have taken up residence along the bottom edge of the screen. Touch will undoubtedly be appreciated by most, but to tell you the truth, I like the fact that the Reader PRS-T2 sports actual buttons. To complement the touch screen, Sony has included a stylus. There isn’t any dock for the stylus like we see on the Samsung Galaxy Note or the Nintendo DS, for example, so you’ll have to keep it in a pocket, which inevitably means that it’s only a matter of time before that sneaky stylus turns up missing (for some of us anyway). The stylus makes navigating easier, especially for someone with big, clunky man hands like me, and there are quite a few instances when the stylus comes in handy, such as when you’re using the Notes app, browsing the web, or highlighting text in a book.

Let’s back track for a minute and focus a little more on those physical buttons toward the bottom of the device. There are five in total: page back, page forward, home, previous, and menu. They’re all pretty much self-explanatory – page back and page forward obviously move through the pages of your book, home takes you to the main menu screen (more on that later), previous takes you back to the last page you were viewing, and menu opens up a little menu packed with options while you’re reading a book. In this menu, you can do things like change the font and its size. There are six or seven different font options (though to be honest I liked the default font the best), and you have a pretty wide range of font sizes to choose from too, from “teeny tiny” all the way up to “you must be legally blind if you need the text to be this big.” 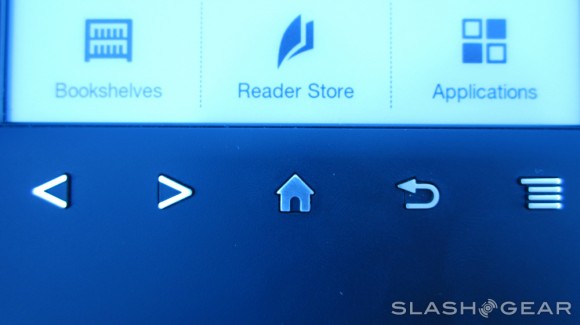 Also in this menu is a navigate page button, which allows you to quickly speed through the pages in your book so you aren’t stuck hitting the page buttons or swiping the screen over and over again. From here, you can also jump back to the book’s table of contents. There are also some shortcuts to the Notes and Handwriting apps, as well as an option that lets you customize your page view, giving you control over the page layout and how the text is displayed. As if those options weren’t enough, there are additional options that allow you to search your book for a specific term, switch between portrait and landscape modes easily, and share what you’re reading to Facebook.

While you’re reading a book, you can highlight a word or a phrase and do a couple of things. In the case of a word, you can look it up in the New Oxford American Dictionary, which comes installed on the PRS-T2. Alternatively, you can also do a Google search for the word, or look it up on Wikipedia, a feature that is nice to have around if you want to know more about a character or place in the book you’re reading. With quotes, you might want to share them to Facebook, or save them in Evernote. 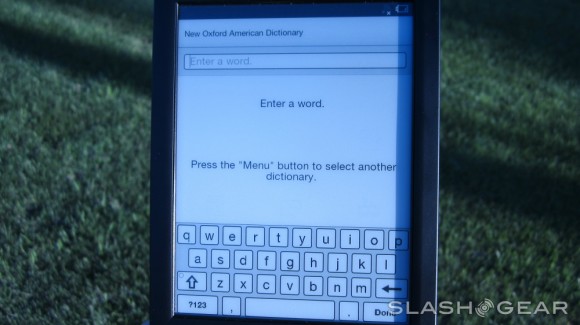 The Reader PRS-T2 boots up relatively quickly, taking a few seconds depending on how big the book you’re currently reading is, and it isn’t long before you find yourself on the main menu screen. From here, you can continue your book right where you left off – it even tells you how many pages you’ve read and when you last read it – or take a look at your four most recently added books or some Reader Store selections. At the bottom of the main menu screen, there are three touch buttons – Bookshelf, Reader Store, and Apps. Bookshelf takes you to a page that displays all the books you have installed in a neat little fashion, whereas Reader Store obviously takes you to the Sony Reader storefront, and Apps takes you to – right again – a page where your installed Apps are displayed.

The PRS-T2 comes with a number of Apps pre-installed ranging from the Public Library app and pictures app, to the aforementioned dictionary, notes, and browser apps. Included are shortcuts to periodicals you’ve downloaded, as well as a handwriting app that allows you to jot down handwritten notes (or drawing maps, as in one of the examples that comes pre-loaded on the PRS-T2). From the Apps screen, you also have the opportunity to set up the PRS-T2’s Facebook integration, or link your Evernote account. Having Evernote integrated is going to be a big draw for a lot of people, considering how popular the service has become. With Evernote, you can add quotes from your favorite books to your collection of notes, or save something you’ve written up with the handwriting app. For many, it’s going to be nice to have Evernote along for the ride, and Sony definitely earns big points for including it in the Reader PRS-T2. 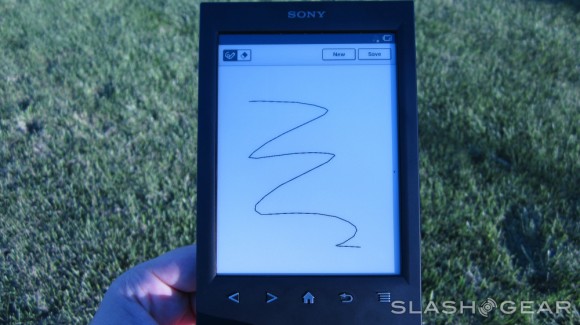 Browsing the Reader Store for new books is simple as well. There are actually a surprising number of books on the Reader Store, meaning that you’re only ever a few taps away from having a brand new book to dive into. Navigating is made easy by the categories the Reader Store is split up in, but if browsing isn’t quite your thing, there is naturally a search function, allowing you to find books based on title, keyword author. While it may not have as many books available as the Amazon Store, the Reader Store still definitely boasts enough to keep any reader satisfied for a long time.

One little bonus that I particularly liked was the fact that the Reader displays the cover of the book you’re currently reading when it’s in sleep mode. This gives you a chance to see how sharp the eReader display actually is, and also has the added benefit of looking really cool. Though we don’t expect ads to be shown on anything that isn’t a Kindle, it has to be said here – Sony doesn’t display any ads on the Reader PRS-T2, meaning that when the Reader is off, the only thing you see is a blank screen. That isn’t much of a surprise, but it’s worth noting, especially considering that Amazon’s Kindle ads have a tendency get people riled up. 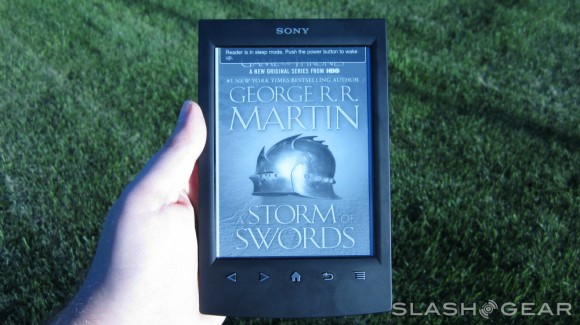 As with most eReaders, the battery on this thing lasts a really long time. That is, after all, one of the major benefits of an E Ink screen. Sony says that the Reader PRS-T2’s battery can last for up to 8 weeks, and to be frank about it, I’m going to have to trust them with this one. The battery came about three quarters of the way charged, and despite using it every night for more than a week – I’ve been reading George R.R. Martin’s A Storm of Swords on it, and anyone who has read that book knows it doesn’t let go easily – I still haven’t been able to kill it. Naturally, the battery will go a bit faster if you have Wi-Fi on all the time, but even then, you probably won’t be reaching for the charger all that often.

So, by now you know that the Sony Reader PRS-T2 comes packed with a lot of nifty features. That’s all well and good, but it doesn’t matter much if you have a device that isn’t comfortable in use. Thankfully, the Reader PRS-T2 succeeds there as well, and it’s lightweight design (the Reader PRS-T2 comes in at just under 6 ounces) makes it very easy to hold. That’s true even for someone like me, who has hands that may as well belong to Hagrid or Andre the Giant. The only problem is that the PRS-T2’s lightweight design also makes it feel a bit fragile. It’s definitely sleek and minimalistic (no ugly full keyboards here), but it also demands that you treat it gently. Naturally, I’m not going to start hurling it across the room to test its durability, but it’s safe to say that exercising a little extra caution when transporting it isn’t a bad idea, especially with that 6-inch screen taking up most of the front. 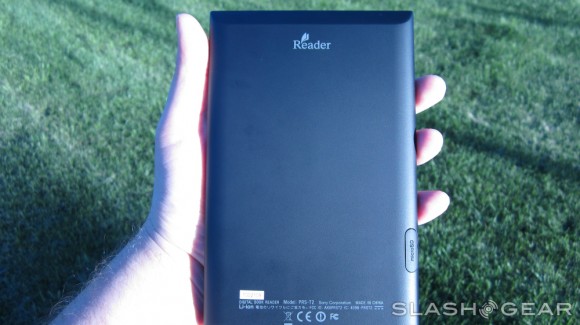 It’s easy to fall for the Reader PRS-T2 – that much is definitely true. However, with that being said, we’ve already seen most of these features on other eReaders. There’s no question that the Sony Reader PRS-T2 is a solid eReader, but that unfortunately doesn’t help with the feeling that it’s a little late to the party. Sony is to be commended for releasing a feature-rich eReader like the one I’ve been enjoying recently, but I wish it had done so sooner. It comes with something of a steep price tag too – $130. Of course, it’s important to remember that the price of this Reader isn’t subsidized with ads, but I still feel like the price is a little too high for what you’re ultimately getting. If Sony would bring the price down a little bit, it would do a lot to make the Reader PRS-T2 a hit with the eReader fanatics of the world. 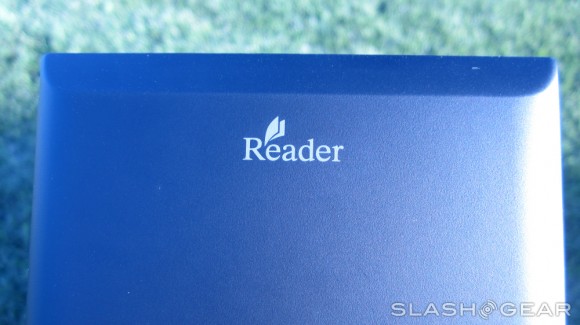 Still, aside from the price, there’s a lot to like about the device. I certainly have no major qualms with it, and in fact I really enjoyed the time I spent with it. If you can get over the price and don’t mind the fact that you won’t have a backlight at your disposal, then I’m sure you’ll be satisfied with the Reader PRS-T2. It comes packed with a lot of extra features and is easy to use – making it a good idea for those who are new to the eReader scene – and it’s a good looking device to boot, so if you’re in the market for a new eReader, definitely give the PRS-T2 a look before you make your decision.