It is sometimes a great feeling to be on the bleeding edge of technology, but there are also some downsides to being an early adopter. This is a truth that some of the very first batch of PlayStation 4 users are learning the hard way as they are forced to say goodbye to hours of hard work in games.

Sony‘s current generation gaming console is just a little over two months old so it’s not that surprising to find a few rough edges, particularly when it comes to software. These, more often than not, are ironed out later on via a series of updates distributed to users all over. That understanding and forgiveness, however, does have its limits, especially when users’ precious save games are at risk.

A 35-page, and still growing, thread on the PlayStation forums has amassed quite a number of complaints from users describing an ominous Error CE-34878-0 that appears on screen. This error heralds the corruption of the save files of the game currently being played. In some cases, the error even prevents starting any other PlayStation 4 app. 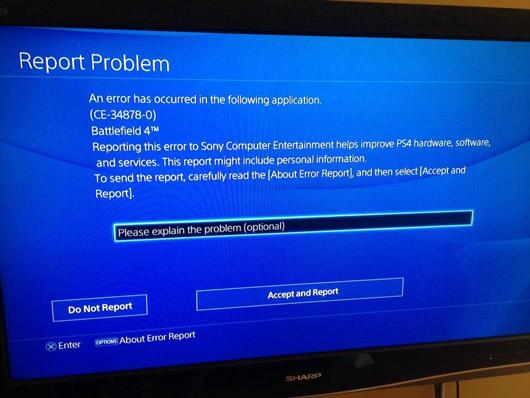 Given how the error appears over a blue background, one can probably think of it as Sony’s version of the Blue Screen of Death. This bug, however, is no joking matter. One factor that aggravates the situation is that it is very random and there are no fixed list of titles where this error occurs. Users have reported it happening on games across the board including NBA 2K14, Call of Duty: Ghosts, Battlefield 4, and Assassin’s Creed 4: Black Flag.

It is quite disheartening that such a serious bug that randomly affects a lot of owners would have passed QA. Given that details of the bug are still unknown, it is almost impossible to ascertain where the problem truly lies in the pipeline. Sony hasn’t yet reacted to the reports and none of the fixes offered by other users have been known to reliably work.