Sony has revealed its latest interchangeable lens camera, the NEX-6, delivering 16.1-megapixel stills and Full HD video from something scaled for your coat pocket. Packing integrated WiFi, an XGA OLED Tru-Finder electronic viewfinder, and a 3-inch positionable LCD, the NEX-6 supports ISO up to 25600 and offers the same Fast Hybrid AF system as Sony previously launched on the NEX-5R.

There’s also Sony’s BIONZ image processor, downloadable camera apps, and support for the E-mount lens system the company debuted for its compact-interchangeables. A dedicated mode dial switches between P/A/S/M settings as well as the useful sweep panorama – which allows you to create a panoramic image simply by waving the NEX-6 at the scene – and there’s an Auto Slow Shutter feature which automatically lowers the shutter speed when possible to increase visibility in low-light situations. 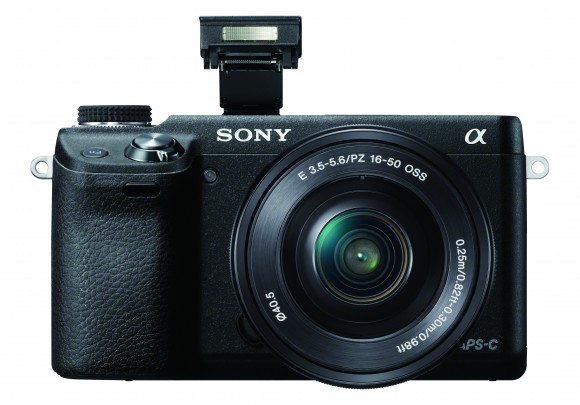 The integrated WiFi can be used to shuttle photos across to Sony’s PlayMemories app for phones and tablets, as well as to a networked PC or DLNA-compatible TV. A pop-up flash is up top, though you’ll need to choose carefully if you want optical image stabilization, as it’s built into certain lenses rather than the body of the NEX-6 itself.

One such example is the new SELP1650, a 16-50mm F3.5-5.6 powered zoom lens with Optical SteadyShot, and which Sony boasts is under 30mm thick when retracted. There’s also the SEL35F18, a 35mm prime F1.8 lens, again with Optical SteadyShot, and the SEL1018 super wide-angle zoom, delivering F4 across its 10-18mm range, and packing stabilization too.