Sony toted along their HFR Comfort-3D video camera to CEATEC, and SlashGear Japan stopped by to check out the single-lens 240fps behemoth.  Intended for recording sports events in glorious 3D, the HFR Comfort-3D has a clever half-mirror system that allows it to shoot both separate left/right eye information for those with suitable polarized glasses, as well as a 2D picture for those without. 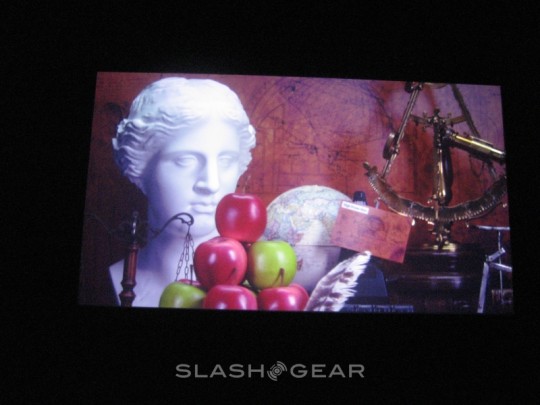 That means that viewers should see a clear picture whether watching in 2D or 3D, rather than a bizarre color-offset effect for those without the special glasses.  The super-speedy frame rate, meanwhile, means that fast moving sports events can be captured without blurring or smudging.

Obviously it’s tricky to show 3D footage in a 2D video, so you’ll have to take SlashGear Japan’s word that it worked in-person.  Basically, the apples were perceived as closer than the spinning globe in the video – as long as you’re wearing the glasses – while passers-by without specs saw a normal, 2D image with no ghosting or flickering.