Late last week, we heard a report that claimed some major changes were on the way to the PlayStation Store. According to that report, Sony planned to stop selling PS3, PS Vita, and PSP games through the mobile and web implementations of the Store. Just as well, Sony would also stop PS4 apps, themes, and avatars through those channels as well.

As it turns out, that report was right on the money, as Sony has now confirmed these PlayStation Store changes through emails it’s sending out to users. I received one of those emails, and it explains that Sony is launching a “brand-new PlayStation Store on web and mobile” beginning next week. For the online store, the roll out will last from October 21st to October 26th, so it sounds like this will be a phased launch that won’t show up for everyone all at once. The new mobile store, meanwhile, will roll out on October 28th.

Just as last week’s report claimed, Sony’s email explains that users will no longer be able to buy PS3 games, Vita games, or PSP games from either the online or mobile versions of the PlayStation Store. Apps, themes, and avatars will also be removed, as will the wishlist feature. As always, content you already own will continue to be accessible and downloadable, you just won’t be able to buy new items. 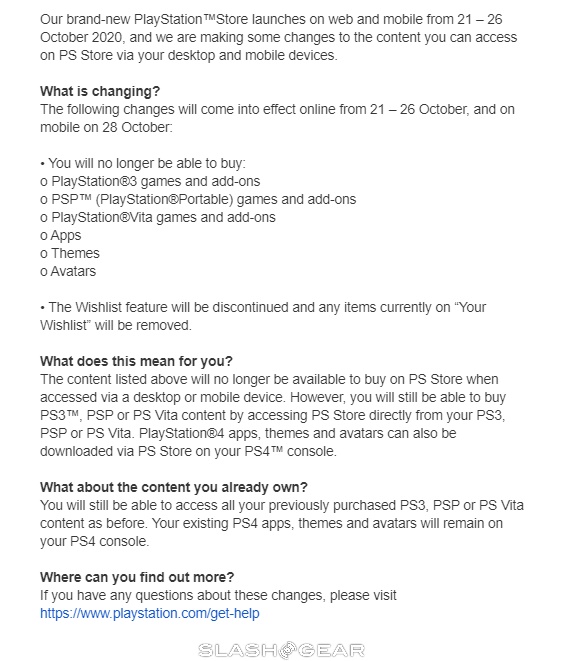 So, watch for these new mobile and online PlayStation Stores to go live beginning next week. Until the PlayStation 5 launches, they’ll probably look a little barren since they’ll only offer PlayStation 4 games, but it won’t be long before they’re packed full of apps and games for the PlayStation 5 as well.