Here’s an interesting development to start your Monday: Yuji Naka, best known as the creator of Sonic the Hedgehog, has joined Square Enix. This somewhat big news is the world of gaming for a couple of reasons, the biggest being that it marks his return to game development after spending many years in the role of producer. He came on board at Square Enix earlier this month, and it seems that he already has a new game in development.

Yuji Naka is best known as the creator and lead programmer on the original Sonic the Hedgehog for the Sega Genesis. With the success of that title, he became one of the key components of Sonic Team and continued his lead programmer duties on the rest of the Genesis Sonic series. From there on out, he took on the role of producer for a lot of big Sega games, such as titles like Samba de Amigo, Phantasy Star Online, and Nights into Dreams.

Naka hasn’t been employed by Sega since 2006, when he left to head up a game studio of his own called Prope. In the time since then, Prope has developed quite a few games, crafting titles for the Wii, 3DS, PSP, and Xbox 360, but most of its focus has been on making iOS and Android games. At this time, there’s no word on what Prope plans to do without Naka at the helm. 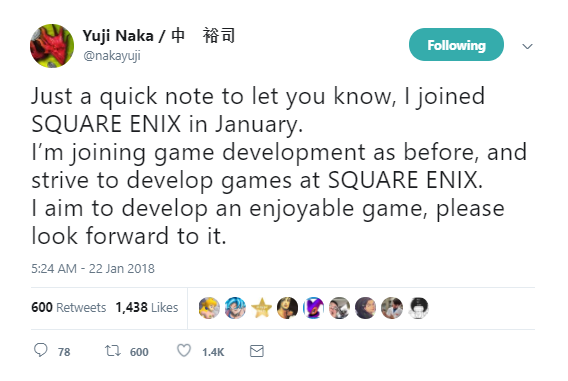 There aren’t very many details about Naka’s project with Square Enix available at the moment. Naka announced his new gig with the Final Fantasy maker on Twitter earlier this morning, only saying that he’s working as a developer once more and that he aims to make an “enjoyable game.” He then asks us to look forward to the project and leaves us to speculate on what it could be.

Since he just started working there this month, it isn’t likely that we’ll hear more about his game anytime soon. Still, you can bet that there are quite a few Sonic fans out there who are interested in seeing what he’ll do at Square Enix. Hopefully we aren’t waiting too terribly long, because seeing Naka return to working on games with big publishers is an exciting thing indeed.