SolidEnergy may double battery life of smartphones and drones

If you find that your phone’s battery capacity leaves something to be desired, you’re definitely not alone. MIT spinout SolidEnergy might have a solution to our battery life problems, though, introducing a new “anode-free” lithium-ion battery that could potentially offer double the life of current batteries on the market. Even better news is that the battery could be available for devices like smartphones as early as next year.

Before that happens, SolidEnergy’s new battery will have its first real-world application in drones later this year. Drones are indeed another item that could benefit greatly from increased battery life, as most battery-powered drones can only stay in the air for less than an hour before the battery needs to be swapped out for another or recharged.

The breakthrough with this battery comes from SolidEnergy’s decision to do away with traditional graphite anodes found in most lithium-ion batteries. Instead of graphite, the battery uses an ultra-thin layer of lithium metal foil, which is about 1/5 the size of the anode found on most lithium-ion batteries you’ll encounter these days. This layer of metal foil can hold more ions, which means higher battery capacity for your gadgets. 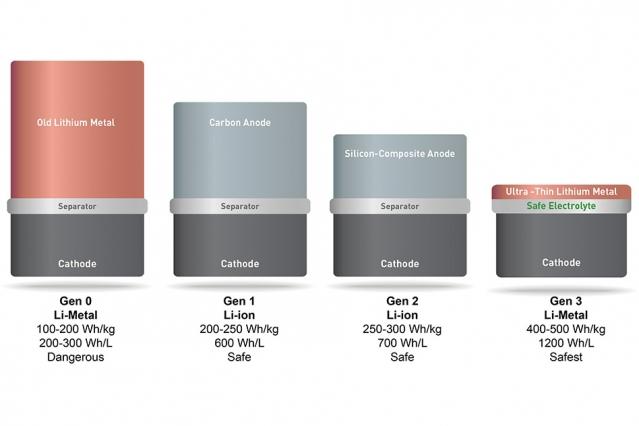 Essentially, what SolidEnergy is doing here is combining the upsides of lithium-metal and lithium-ion batteries, bringing us a longer-lasting battery that’s safe to use and functions at lower temperatures, thanks to liquid and solid electrolyte coatings SolidEnergy also developed while it was making its battery.

The final result has some exciting implications for the longevity of our devices. “With two-times the energy density, we can make a battery half the size, but that still lasts the same amount of time, as a lithium ion battery,” SolidEnergy CEO Qichao Hu told MIT News. “Or we can make a battery the same size as a lithium ion battery, but now it will last twice as long.”

While SolidEnergy’s new battery will make its debut in drones later this year, availability for smartphones and wearables won’t be far behind. The battery will launch for smartphones and wearables in early 2017, and then for electric cars in 2018. Hopefully adoption of SolidEnergy’s battery is quick, because more battery life is always a good thing.