Smartphone battery cases aren’t uncommon but, given their nature, they add considerable bulk to your phone and take away any semblance of premium or luxurious design. That’s especially a problem if you have an expensive and handsome one like the iPhone X. Russian accessory maker Caviar has found a solution. It’s new iPhone X Tesla offer tries to distract you from the gigantic case using gold trimmings, a solar panel, and a price tag that costs almost five times the iPhone X itself.

Yes, this is practically an iPhone with gold accents and a solar panel. No, Caviar doesn’t sell the case on its own. You’d have to buy both a new iPhone X and the case in one iPhone X Tesla package, which has nothing to do with any definition of “Tesla”.

The iPhone-X-with-case was first spotted back in November from the accessory maker (in)famous for its Vladimir Putin (and Donald Trump) phones. The iPhone X Tesla definitely looks the part of a luxury accessory with 24K Gold trimmings all over the back and a gold plate signifying its limited edition character.

Just don’t turn it to its side, though. The solar panel obviously adds no small amount of thickness. But at least you’re helping the environment with a more eco-friendly way to recharge your iPhone X, right? Unfortunately, Caviar doesn’t go into detail into the power specifications of that solar-charged battery. 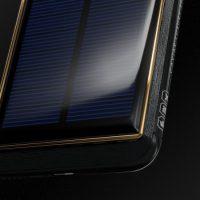 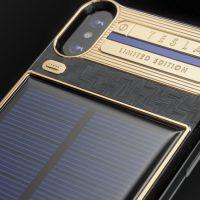 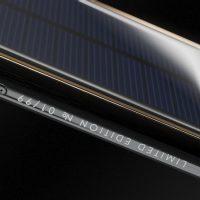 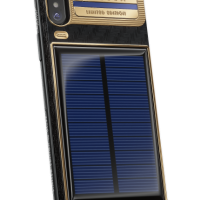 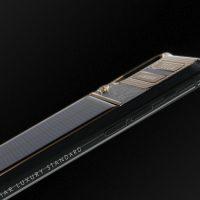 As you can probably guess, the price will make you cringe. That’s around $4,600 for a 64 GB iPhone X Tesla and $4,800 for a 256 GB model. THat doesn’t even include taxes yet. So you must really want a gold-laden solar-charged iPhone X to sink your teeth, and money, into this thing.