Snapjet prints your phone photos without wires or apps

Despite the growing number of smartphone photography enthusiasts, there is also a growing resurgence in interest with “instant film” printing started by Polaroid. There are many solutions out there, ranging from a dedicated camera, a bulky photo printer, or an insanely bulky smartphone case (we’re looking at you Prynt). What if you could throw out all that bulk and still have printer that works with any smartphone of any size? Well, you could do that with this Kickstarter called Snapjet, that prints instant film photos without wires, WiFi, Bluetooth, NFC, or even apps.

Sounds crazy right? But we sort of already have that technology in our homes or offices (or home offices) to some extent. If you’ve guessed that all in one-in-one printer sitting in the corner, you’ve got that right. Snapjet is almost like that, except in a pocket-friendly size. Snapjet basically scans the photo that is displayed on your screen and prints it out on film. All you need to do is to place your phone on the printer, display facing down, and push a button. Of course, the devil is in the details, but the theory is the same. 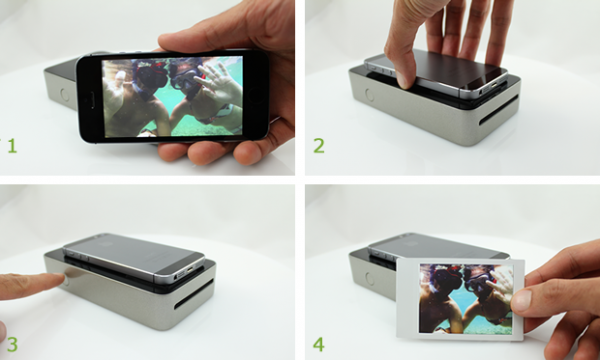 Snapjet uses the very same light emitted by your smartphone’s screen to expose the film lying inside. It employs micro-structured optical polymers, basically a bundle of optical fibers, to transfer that image onto the film. The printer also uses a thin sliding layer so that the whole film sheet doesn’t get exposed all at once and only in stages. The slower the sheet slides to expose the screen, the brighter the resulting photo will be. But the slower the printing will be too.

The great thing about Snapjet is that it was designed to work with almost any combination possible. It doesn’t have fixed mounts (though there seem to be guides for an iPhone 5) so it can work with any smartphone screen. Actually, the quality of resulting photo is directly proportional to the quality of the screen. The printer can also work with either Polaroid 300 films or Fujifilm’s Instax variant. Plus, the board design is also being open sourced so those who want and can will be able to build their own. There is also an OLED display, a USB port, and Bluetooth LE connectivity so that modders can also repurpose Snapjet to their hearts’ desire.

Sounds too good (or too strange) to be true? The only proverbial wart right now on Snapjet’s is that it isn’t a commercial product, at least not yet. It can only be found on Kickstarter where a limited number of $129 pledges will get you one printer, later to become $149 when the tickets run out. At the moment, they’ve just crossed barely a third of their $155,000 goal, though they still have 25 days to go to prove that there’s a market for their innovation.