It’s been some time since we’ve seen Qualcomm upgrade its wearable silicon, but today, the company announced that it’s doing just that. Qualcomm has revealed the Snapdragon Wear 4100 series, which comprises the standard 4100 and the 4100+. Like the 3100 series that came before it, the Snapdragon Wear 4100+ is built using Qualcomm’s “hybrid approach” that pairs a main SoC with an always-on co-processor.

In the 4100 platform, the quad-core Cortex A53 at the core of that SoC is built using a 12nm process, which Qualcomm says should offer big improvements to both speed and power efficiency. Keep in mind that the Wear 3100 platform was built using a 28nm process, so the 4100 is indeed a pretty big improvement over that. The Cortex M0 processor will serve as the 4100+’s always-on co-processor, which can work either in tandem with the A53 or on its own.

That, too, has seen improvements over the previous generation for a bolstered ambient mode. For example, the Cortex M0 supports up to 64k colors, while the co-processor in the SDWear 3100 platform only supported 16. The co-processor will handle things like continuous heart rate monitoring, sleep, step counts, alarms, haptics, and timers as well, so even when you’re not actively using your watch, it’ll still be doing quite a bit in the background. 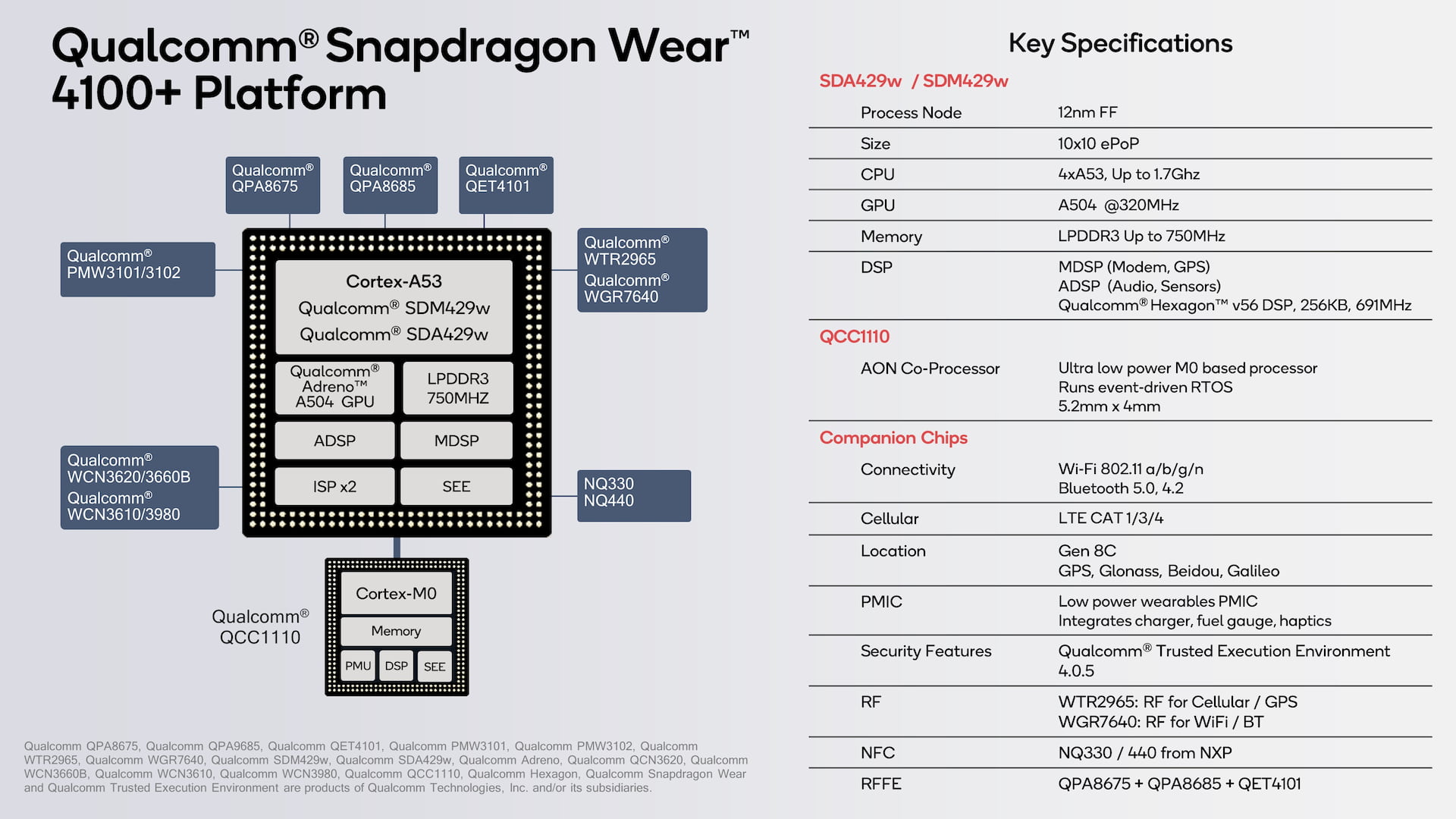 Qualcomm says that the 4100’s 4G LTE mode has been improved through dual dedicated DSPs for modem/location and sensors/audio, but it seems we’ll have to wait at least until the next Snapdragon Wear platform before we get support for 5G connectivity. That comes as little surprise considering that 5G is still getting off the ground around the world, and if two years separate SDWear 4100 and whatever is next just as they separated the 3100 and 4100, then we should see the next Wear platform launch when 5G is far more widespread.

In any case, the 4100 platform also supports LPDDR3 memory and uses Adreno 504 graphics in conjunction with it Cortex A53 processor. The 4100 will also support up to 16MP cameras – thus far a relative rarity on smartwatches but perhaps not after the 4100 replaces the 3100 as Qualcomm’s main wearable platform. In all, Qualcomm expects the 4100+ to deliver 85% faster performance over the 3100, but it is worth pointing out that the standard 4100 doesn’t feature the co-processor, making the 4100+ Qualcomm’s flagship wearable SoC. 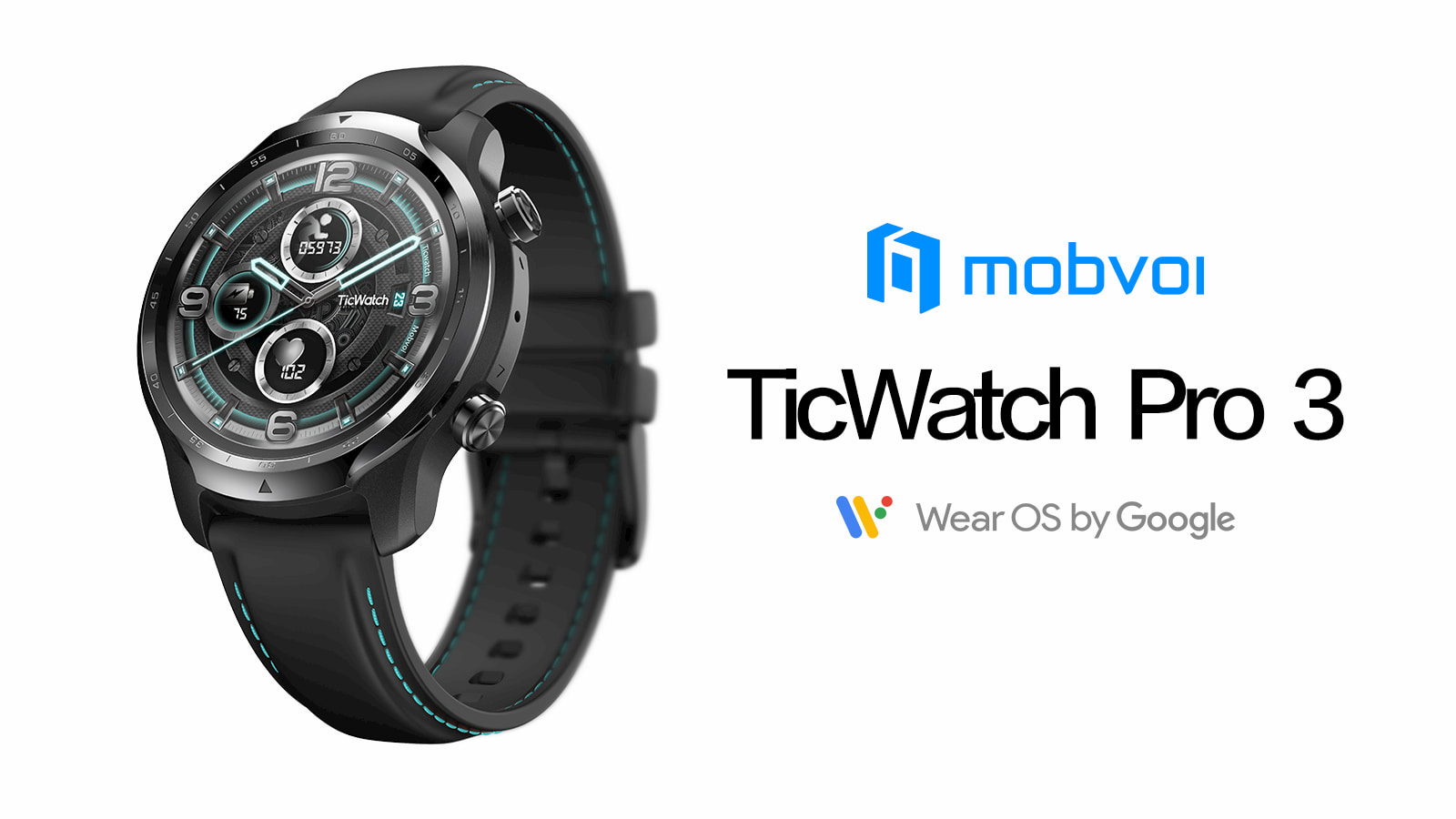 The 4100+ will support Google’s Wear OS platform, while the 4100 will support both Wear OS and the Android Open Source Platform. Both configurations are available to Qualcomm’s partners beginning today, and the first two smartwatches to leverage the platform have already been announced. First, we have the imoo Z6 Ultra smartwatch, which uses the standard 4100 and is aimed primarily at children. Mobvoi has also confirmed that its next-gen TicWatch Pro 3 will use the 4100 as well, but while imoo expects to begin shipping the Z6 Ultra within the next 30 days, we don’t have a release date for the TicWatch Pro 3 yet.

Qualcomm’s problem, of course, is actually getting Wear OS watch-makers to actually use its new SoC more broadly. As we saw with the Snapdragon Wear 3100, even though a newer chipset was available, that didn’t stop manufacturers launching models based on the previous Wear 2100. As a result, it’s hard to argue with the idea that the Wear OS category in general has been stagnating – that’s bad news for Qualcomm and for Google. Whether that problem can be turned around with Snapdragon Wear 4100+ remains to be seen.