Smartphone sales are growing again, and Huawei is on the rise

Back in February, Gartner revealed that, for the first time in more than a decade, smartphone sales have declined. Just a wee bit, mind, but still declined. That may cause some worry for market analysts and manufacturers if that trend continued for months. Fortunately for everyone involved and invested in the market, that’s not the case. At the end of the first quarter of 2018, smartphone sales are back up. But more importantly, one of the winners in that quarter is Huawei, one of the most embattled OEM as well.

The growth that Gartner is talking about, however, isn’t a huge rebound from the previous quarter. For some manufacturers, growth has stalled or slowed down. That includes Samsung, though it remains to be the top dog in terms of Smartphone sales. Its biggest problems come from the rise of Chinese brands across all tiers as well as the overall decline of premium smartphone purchase in the market.

Apple, however, managed to catch up with delayed sales to make its 2018 entry a bit more encouraging. It’s still not as high though, especially given the high prices of last year’s iPhones, particularly the iPhone X. Like Samsung, Apple is expected to shake up its strategy this year with an LCD iPhone that bears the design as the iPhone X, just cheaper.

Despite its troubles in the US, Huawei retains its top three spot and even managed to grow a bit. It may need to find a way to resolve those political hurdles, though, if it wants to see even bigger growth. Right now, ZTE is the scapegoat for US-China problems, though it’s only a matter of time before Huawei takes its place. 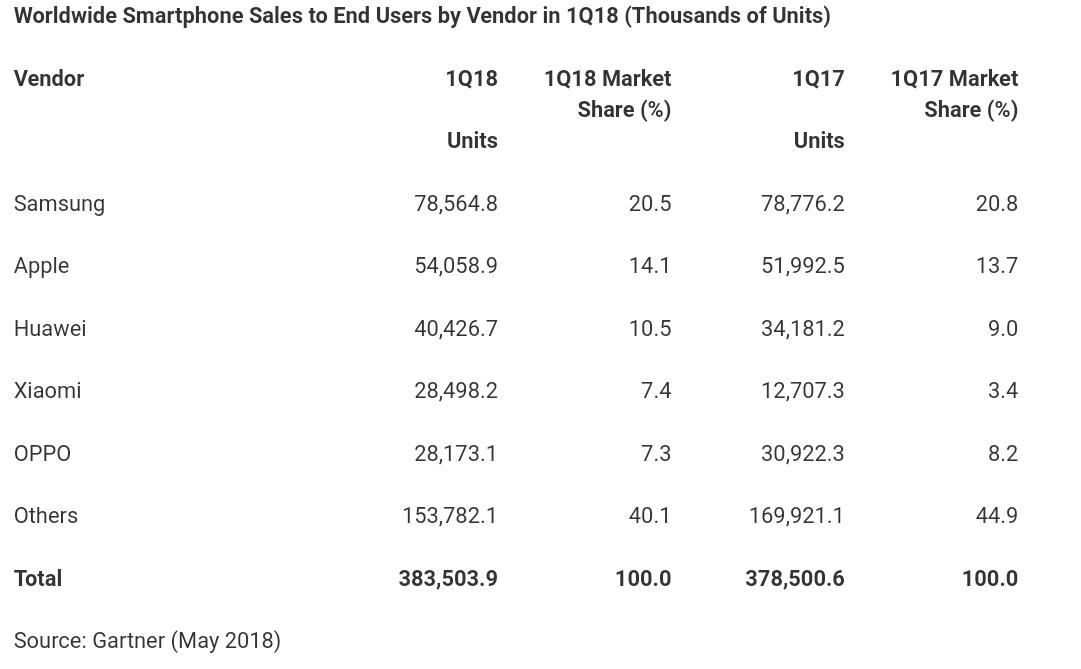 The biggest winner, however, is Xiaomi, which sa a 124% increase year on year. And that’s without even having a smartphone in the US. Admittedly, it only sells a third of what the likes of Samsung make, but it still proves how much potential there is in other markets.