Christmas is always a big day for the smartphone and tablet space, but this year, Christmas was bigger than ever. That’s according to analytics firm Flurry, which tracked activation data for the first 20 days in December and then compared it to the data it received for December 25. It probably won’t come as a shock to most to hear that the data Flurry has for Christmas Day shows a huge number of activations for both tablets and smartphones.

According to Flurry’s data, about 4 million iOS and Android devices were activated per day between December 1 and December 20. That formed the baseline for activations in December, and it was one that the data for December 25 shattered. Activations on Christmas Day skyrocketed to 17.4 million, climbing 332% over the December 2012 baseline of 4 million and topping the previous single day record set on Christmas Day 2011, which was a mere 6.8 million activations.

Of course, with the surge in device activations also comes a surge in app downloads. The baseline for app downloads in December came in at 155 million per day, which was again determined by watching downloads over the period spanning December 1 to December 20. On Christmas day, app downloads jumped to 328 million, doubling the baseline and once again breaking records set by any previous day. 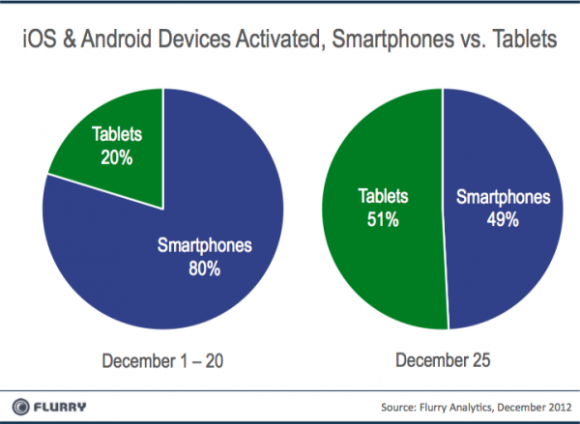 Interestingly, a surprising number of people received tablets on Christmas day. Flurry’s data shows that smartphones accounted for 80% of the activations between December 1 and 20, but on Christmas day, only 49% percent of the devices activated were smartphones. Be sure to take a few minutes to check out through Flurry’s full report, because it proves to be a very interesting read!