Smart Reply in Gmail arrives on Android and iOS

Phones have long offered preset text replies for those times you’re too busy to peck out a response: something like “I’m busy, I’ll call you later” or “I’m driving.” Back in late 2015, Google followed that lead by introducing a Smart Reply feature in Inbox, something that offers three suggested replies based on the contents of the email the user receives. If you’re too busy to type a response, selecting a Smart Reply saves precious seconds in your day. Now, Google announced today, that feature has arrived in Gmail for Android and iOS.

As with Inbox, the Smart Reply feature in Gmail for Android and iOS suggests three possible responses based on the content of the received email. As one example, if an email asks what time you’d like to schedule a meeting, Google’s technology will intelligently discern the possibilities and offer them as canned responses. If one of those responses is suitable for your needs, just tap the response and Gmail will send it on its way (unless you choose to edit it first). 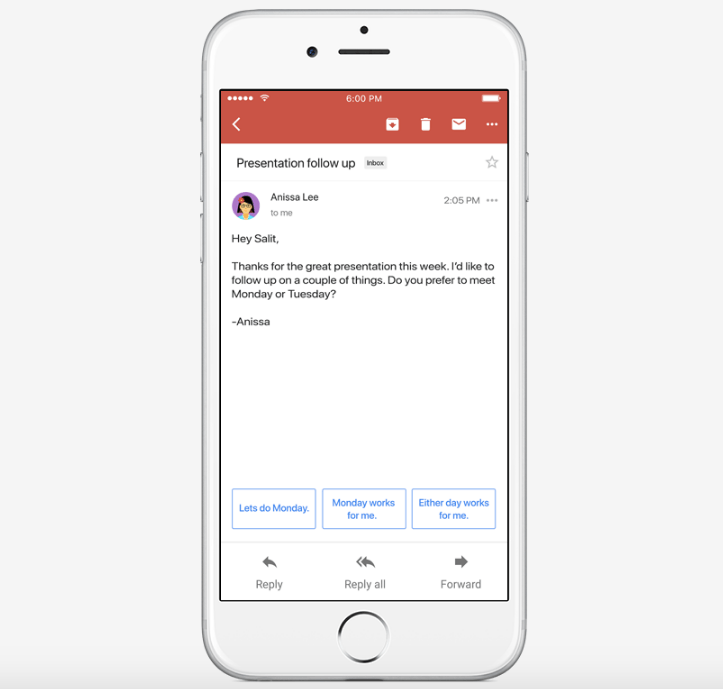 At best the Smart Reply will entirely eliminate the need to type, but more often than not it’ll simply shave down the amount of typing you have to do, providing a foundation of sorts upon which you can customize the message with additional details or pleasantries. What could take 20 seconds to write and send may be reduced to a mere two or three seconds, and that’s never a bad thing.

Assuming you’re using Gmail on either Android or iOS, you should see the feature arrive any time now — it is rolling out to users around the world. Smart Reply will first support English, but Google says that there is Spanish support in the pipeline, and that it will be making its way to users ‘in the coming weeks.’ Other unspecified languages will follow, as well, though without a definite time frame.