Sling Media’s much awaited SlingPlayer Mobile for iPhone is finally here and available for purchase in the iTunes App Store.  The price is $29.99, which is on par with SlingPlayer Mobile for Windows, Blackberry and Symbian. The only two differences between SlingPlayer for iPhone and the other platforms are all-touch navigation and the crippling of streaming over 3G and EDGE data connection.  Streaming shows from a SlingBox to the iPhone anywhere and anytime is the primary reason to shell out $30 for an app.  With AT&T playing the Terms and Condition card against Sling Media (see below), forcing their hands to disable 3G in order to pass through the App Store, it renders the app completely useless when you’re not in a WiFi zone.

The app is officially supported by all of Sling’s current SlingBoxes. Customers with legacy boxes, including the AV, Classic, and TUNER are on their own should they need technical support for any reasons.  I had no problems installing the app, configuration and connecting to an existing SlingBox Directory.  Connection was painless and quick but even though I was on WiFi, flicking through channels took a couple of seconds per channel.  Navigating through channels is as easy as flicking up or down and flicking left or right for navigating through your list of favorites. 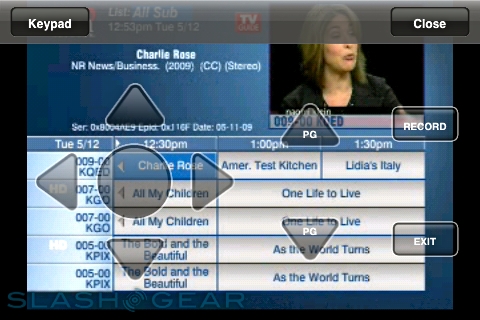 Right now Sling only support 4:3 aspect content, which scales up to fill most – though not all – of the iPhone’s screen.  The company tells us that 16:9 widescreen support will be added in the app’s first update, though it will still have small black bars top and bottom since the display isn’t true widescreen.

The biggest drawback to the app, then, isn’t even its own fault.  Unlike the S60, Windows Mobile, Palm and BlackBerry versions of SlingPlayer Mobile, the iPhone software is unable to access the handset’s 3G connection and is limited to WiFi connections.  AT&T are at fault here, and it’s thanks to the App Store and the software limitations it places on developers if they want to be included that the carrier’s terms and conditions are being so rigorously imposed on one particular user group.  AT&T’s statement is as follows:

“Slingbox, which would use large amounts of wireless network capacity, could create congestion and potentially prevent other customers from using the network. The application does not run on our 3G wireless network. Applications like this, which redirect a TV signal to a personal computer, are specifically prohibited under our terms of service. We consider smartphones like the iPhone to be personal computers in that they have the same hardware and software attributes as PCs.

That said, we don’t restrict users from going to a Web site that lets them view videos. But what our terms and conditions prohibit is the transferring, or slinging, of a TV signal to their personal computer or smartphone.

The Slingbox application for the iPhone runs on WiFi. That’s good news for AT&T’s iPhone 3G customers, who get free WiFi access at our 20,000 owned and operated hot spots in the U.S., including Starbucks, McDonalds, Barnes & Noble, hotels, and airports. AT&T is the industry leader in WiFi.” AT&T official statement

The underlying message seems to be that AT&T don’t think their network could manage 3G streaming.  Going a step further, we’d wager that the success of the iPhone and use of the App Store means that SlingPlayer use among owners of the smartphone will be much higher than that of other handsets.  AT&T doesn’t feel the need to clamp down on 3G streaming for other devices, because they’re a relatively small percentage of overall network use.  However we’ve all seen what happens to AT&T when iPhoners start using their handsets in earnest: the 3G gets overwhelmed. 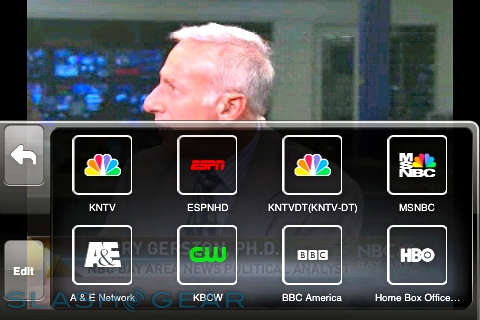 AT&T are facing a situation that analysts have been predicting for years now: mobile media taking off, and network capacity being unable to support it.  The problem is that it seems to have happened sooner than the carrier expected, and the only way to deal with it is, ironically, forbid it.  That’s not a long-term solution, but the only real way to get around it is significant infrastructure investment, and right now that’s what no carrier particularly wants to do, especially if they’re not making money from either selling content themselves or charging for data access.

As it is, SlingPlayer Mobile works reasonably well over WiFi, and from talking with Sling themselves we’ve no doubt that future versions of the software will tidy up loose ends like navigation sluggishness and being limited to 4:3 aspect.  The overall experience, however, is the mobile TV equivalent of wearing a patch over a perfectly good eye.