Sling TV is an exciting option for television viewers, giving the best of television while offering the convenience and piecemeal freedom that comes with watch-it-anywhere Internet streaming. The service, which is from Dish Network, offers a core package that includes many channels streaming in real-time, counted among them being such popular offerings as ESPN, AMC, Disney, ABC Family, CNN, and more. Some users have discovered that not all is quite as it seems, however, and they have started to revolt.

The issue surfaced on Reddit, where some in the Cord Cutters subreddit have reported issues with “Restricted Content” limitations when trying to watch certain episodes of certain shows…something that immediately dashes any impression that one is watching “cable” and ushers back in the same limitations that haunt viewers across the streaming world. 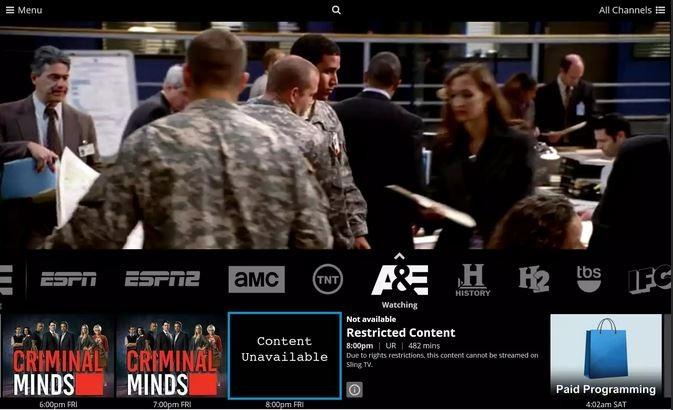 Users are reporting that some content on Lifetime Movies, A&E, WEtv, and more are restricted, and that some of those restrictions surface even during regular airing schedules, not just past content. As you can see in the screenshot above, the content is listed as unavailable due to “rights restrictions” that prevent it from being streamed.

Redditor weopre expressed his or her frustration with the service, saying, “Just look at sling’s A&E epg for today. I’d say [a] third of [the] day’s programming is ‘unavailable due to licensing rights’. Same yesterday.” Users have expressed frustration with the content limitations, saying it presents the same problem that has plagued cable cutters for years, diminishing the value of the service. Likewise, others point fingers at Dish, saying it failed to make it clear that not all content would be available across all channels.