Right this very moment you’re probably seeing a few Vine videos popping up on your Twitter feed wondering what on earth these tiny videos are taking hold when previous (rather similar) apps and services have done it so many different ways before. There are several reasons why this service is catching the public’s taps at a furious rate, the first of them being the fact that Twitter acquired the company and decided to tell their entire userbase to go ahead and make Vine videos as much as possible, right away! The second is the iTunes App Store choosing Vine as an Editor’s Choice download just yesterday.

Vine is an app that allows you to record videos from your smartphone or tablet device (though it’s optimized for smartphones) in segments or all at once. You can hold your finger down on the screen (also a viewfinder) to record one long 6 second video, or you can hold it down in bursts, recording as many short moments as you like inside 6 seconds total. These videos are processed extremely rapidly and are able to be uploaded to the internet (hosted by Vine) quickly as well. 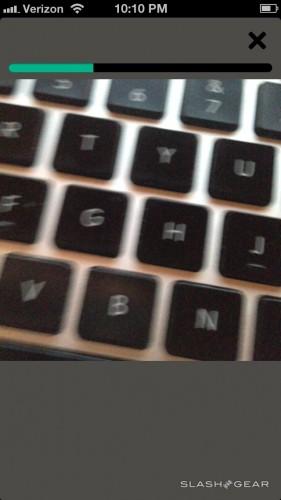 Once you’ve created a video in Vine, you have the option to do several things with it, the first being absolutely nothing at all:

At the moment unless you exit the Vine app and upload the resulting video through some other non-Vine service, you’ll need to upload to Vine in order to see your video shared anywhere else. Also at the moment the two services you’re able to share with (besides the app-centric Vine itself) are Facebook and Twitter. Vine is very similar to the app Instagram in that you’re able to create media and share it only with your other friends in-app, but unlike that environment, Vine makes no effort to hide the fact that everything you upload to the web is, indeed, entirely public. 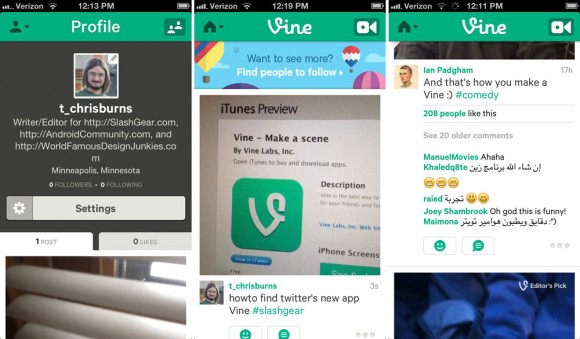 If you upload anything you record with Vine to the internet, it will be public. That’s the long and short of it. According to Vine’s Privacy Policy, anything you choose to share with Vine is considered information (and media) that you choose to be made public. This includes data of all kinds, video, location information, the profile you create, and everything in-between. 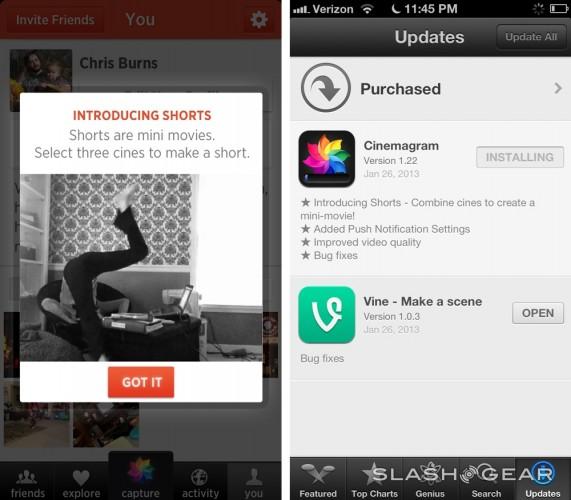 If you like Vine but you’d rather create your miniature moving images in gif form (that’s less like a video and more like a moving photo file), you may want to check out Cinemagram. They’ve been open for business for many months at this point and have just (this week) revealed a new way to create media called “Shorts” which combine several of their own “cine” clips to create a mini movie – that’s not a coincidental release at all – no way! 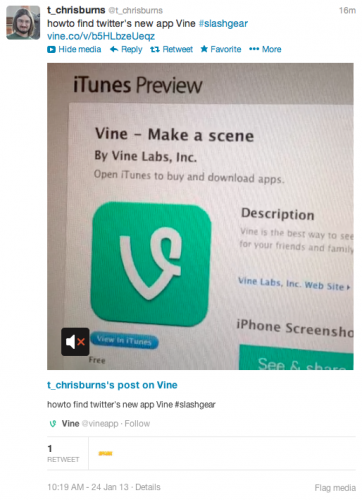 You’ll be able to download Vine from the iTunes App Store right this minute for free, if you feel the urge to jump in on this mini movie party – it’s optimized for iPhone and iPod touch, but you can use it on your iPad too if you don’t mind the tiny layout. This app will almost certainly be coming to Android very soon, and we wouldn’t be surprised if Windows Phone 8 got a taste of the joy before Summer rolls around.