The video chat and VoIP application Skype has received an upgrade before the push to Windows 8 this week with a go-ahead from Microsoft. This week we’re having a peek at everything Windows Phone 8 as we watch the upgrades roll in at the Windows Phone Summit dedicated to the new platform. As Skype’s upgrade for the current generation of Windows Phone goes live today, so too do we get a glimpse of what’s to come for the Windows Phone 8 OS of the future.

This version of the application (available today) brings on a much more smooth experience for the full Voice Over IP users of the Windows Phone universe. Included in this upgrade you’ll find the display of all contacts that have one phone number on one list, the ability to edit phone numbers using your dial-pad before making calls, and a set of bug fixes as well. 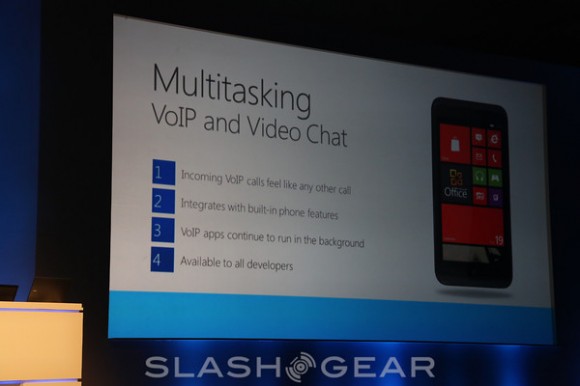 One bug fixed here has been a major one for some calendar-using citizens, it being a fix for an issue in which a Skype call would end if a calendar notification appeared or if another Skype call came in during the first. Skype’s VoIP service will be much more deeply integrated with Windows Phone 8 than it ever has been before, with VoIP options appearing right alongside your regular everyday cellular calls right from the start.