We knew Apple would be coming out swinging with Siri, their virtual assistant. Along with Siri finally going international they have announced all sorts of great new features coming in iOS 6. Siri will be better than ever, can now launch apps, and most likely we’ll be seeing plenty more of Zooey Deschanel in the near future. Head below to see what’s new.

Siri will be doing a lot more for users in the coming weeks. Apple briefly teased an eye-free user experience in-car with multiple partners from GM, Audi and more but for now we’ll get into the daily stuff. Apple has partnered with Yelp and Rotten Tomatoes, and will even be able to alert you on the score of the NBA Finals or your favorite sport. With game score updates, highlights, notifications and more this will truly become an assistant we all want. 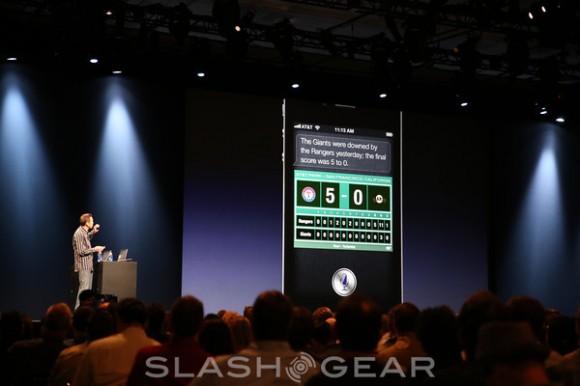 Siri will also finally be going international. For those that have been patiently waiting its arrival we are happy to announce it will be available with iOS 6. The picture from the gallery below should give you an idea on where to expect Siri in the coming months. With support for English, Italian, Mandarin for Taiwan, Cantonese for Hong Kong, Mandarin and Cantonese for Mainland China, plus Korean for Korea they’ve truly gone full stream. It’s safe to say Siri is no longer in beta with iOS 6.

We have plenty more details coming up shortly regarding Siri, including the fact that you can now launch apps with ease — like: Play “Temple Run” or Open “Twitter”, even send tweets while driving and more. Stay tuned and be sure to follow our liveblog!