A recent study carried out Experts Exchange has compared the user satisfaction ratings between the three main virtual assistants, Apple’s Siri, Google Now, and Microsoft’s Cortana. In survey covering a number of different aspects, including accuracy in answering questions and completing requests, along with overall satisfaction, Siri came out on top, followed by Google Now, and then Cortana.

The user satisfaction measurement was itself broken down over several requests, including answering questions about when a movie will be released, or how many calories are in a food item, along with completing tasks like turning on the WiFi setting, scheduling a calendar appointment, and sending a text message. Siri topped with an 81% satisfaction rating, while Google Now followed with 68%, and Cortana with just 57%. 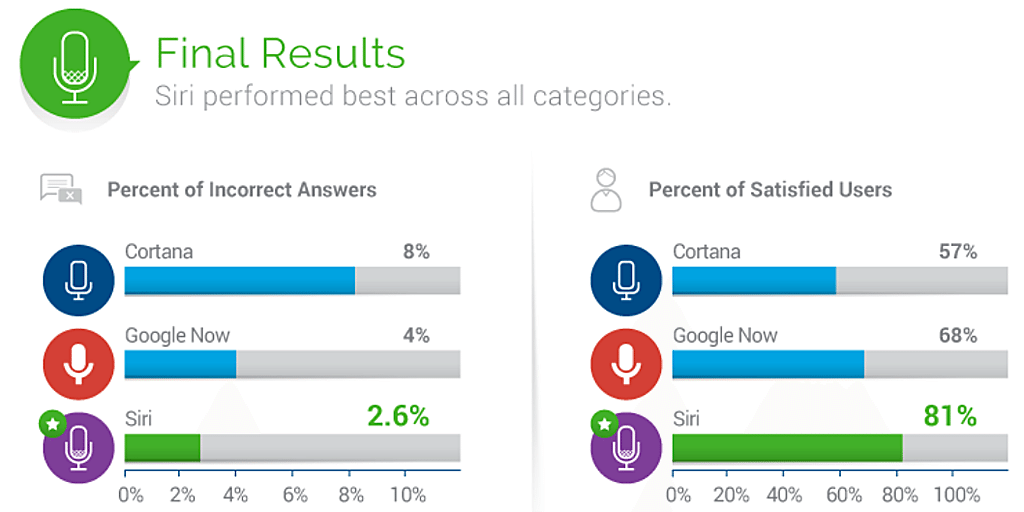 As for accuracy, users were not only asked to consider if the assistants did the right thing, but also how many follow-up questions were involved, or how many corrections had to be made, before the task was completed. Again, Siri was rated best with the lowest percentage of incorrect answers (2.6%) in addition to fewer follow-up questions. Google Now ended up with 4% and Cortana with 8% incorrect answers.

The full details of the survey can be seen at Experts Exchange’s website. While the study is far from scientific, it does provide an overall look of what users seem to prefer when it comes to a smartphone assistant, and in the meantime is does seem that Apple is winning in terms of popularity, while Microsoft’s Cortana has some serious catching up to do.