In among Intel’s hyperbole for the Atom Z6xx launch earlier this week were some impressive stats for internet browsing performance, contrasting what users of Moorestown-based MIDs, tablets and smartbooks could expect in comparison with rival devices.  Steve Paine over at UMPC Portal decided he couldn’t wait for the first Z6xx demo units, and so set up some browser tests of his own; he locked a Menlow-based Viliv X70 MID to 800MHz and pitted it against the iPad for some real-world surfing.

Video comparison after the cut 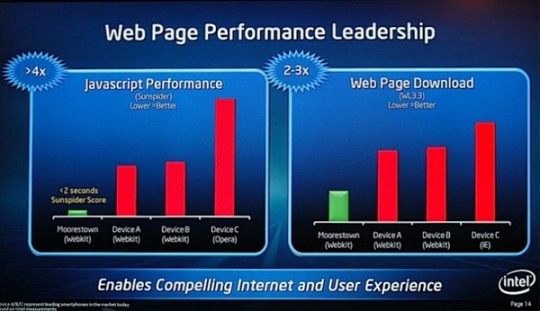 “I took the Intel Atom-based Viliv X70, a 7” tablet with a 1024×600 7” touchscreen running Windows XP Home, installed the latest Google Chrome, locked the CPU to 800Mhz and did some random web browsing tests. Remember that the Menlow platform used in the X70 is very close to the architecture used on Moorestown. The CPU are GPU are architecturally almost exactly the same. I side-by-sided it with an iPad which is, according to my tests with the Archos 5, X10 and HTC Desire (all running high-end ARM V7 architecture cores) the fastest ARM-based browser solution out there” Steve Paine, UMPC Portal

Steve’s thinking is that, since the Menlow platform of the X70 is actually pretty similar to the Moorestown platform just around the corner, the X70’s performance actually makes for a reasonable predictor.  He found that, at 800MHz, the X70 is pretty much on a par with the iPad browser.

Ramped up to 1.3GHz, meanwhile – as high as the X70’s CPU will go, but short of the 1.5GHz the new Atom Z6xx processors will manage – and the Intel-based MID could render pages significantly faster than the iPad could, including Flash support.  With Flash disabled it was even faster.  It’s enough for Steve to state that Moorestown will likely “deliver web pages, process script, decrypt HTTPS, GZIP and images much faster than the best ARM-based solution out there,” and that’s before you get to multitasking support.