Two undergraduate students from the University of Washington have created a glove that could make a huge different in how people who use sign language communicate with people who don’t understand sign language. The glove is able to translate gestures made in American Sign Language (ASL) into English and then says what the gestures mean via attached speakers. The invention is called the SignAloud glove.

The two student creators won the $10,000 Lemelson-MIT Student Prize thanks to their invention. The glove has embedded sensors that capture ASL gestures by measuring coordinates and the way individual fingers flex or bend. That sensor data is sent via Bluetooth to a computer nearby that feeds the data into coding algorithms to categorize the gestures. 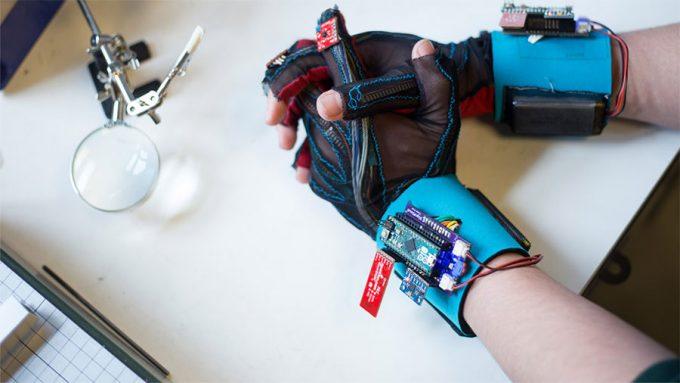 Those gestures are then translated into English and played through the speakers. Co-creator Navid Azodi says that the SignAloud glove is still very much a prototype. “Keep in mind, we have by no means captured the entire language and we’re nowhere near that. [ASL] is more than just words and phrases, and we know that. It has complex grammar structures. What we eventually want to get is for SignAloud to categorize a majority of the language,” says Azodi.

Azodi and a fellow sophomore student Thomas Pryor planned and built the SignAloud glove in the dorms where they live and at the CoMotion MakerSpace the school operates. The glove could be used to translate sign language into other languages as well. The designers also see the glove as being useful for teaching people sign language via instant feedback on what they are signing. The duo plans to improve the glove with the ability to learn the deep syntax of ASL and the inventors want to hire an expert to help them with that aspect of the development.