Capturing the moment is something we all enjoy, and we’re turning to our smartphones more and more to do so. If you’d rather be in the shot than hidden behind the screen, Shutter Halo might be what you’ve been looking for. The small button links to your camera via Bluetooth, and lets you snap a picture remotely. Now you can be in the pic as well as the one taking it! Does a small button really stand up to your wants as a mobile photographer? We find out.

There isn’t much to Halo — it’s a button. The core hardware is comprised of little more than a small plastic piece with a center that gives way to touch. It’s like a plastic Rolo candy. Halo, Rolo — one you don’t eat, the other is delicious.

Halo also comes with a tiny stand so you can set your phone down for the perfect framed shot. A small lasso is also included, should you want to affix your Halo to a keychain or something similar.

The Halo itself is light, but not cheap feeling. If anything, it seems like something that is lost from a larger component, but smacks of reliable quality.

The stand is pretty flimsy and cheap, but under normal use, it would likely hold up just fine. 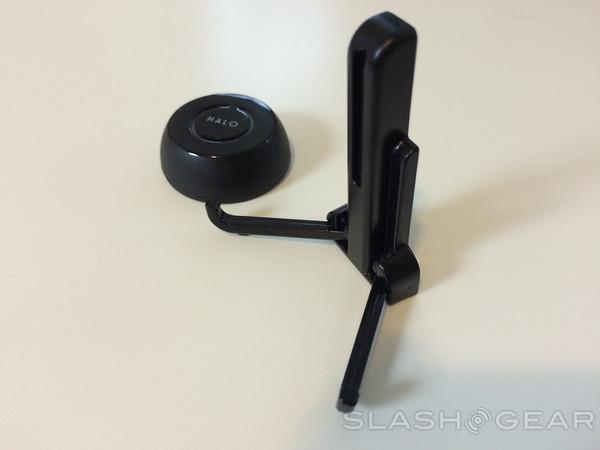 Halo has an app to compliment the button hardware in Shutter Panorama, and it’s needlessly simple as camera apps go. It doesn’t re-orient the buttons to landscape, has no means of zoom, and no granular controls. It shows you what you’re shooting, and waits for Halo to give the trigger command.

You can toggle between video and photo modes by tapping the camera/video icon on the bottom left, and switch between cameras. You can also control the flash, and the gear icon re-pairs your smartphone to the Halo if needed. The question mark is your user guide. It’s seriously that limited.

The app also doesn’t work with anything but the Halo, either, so you couldn’t have it as your lone camera app. With all the new manual camera apps coming out, the Shutter Panorama app lacks even the simplest depth that would make Halo shine. 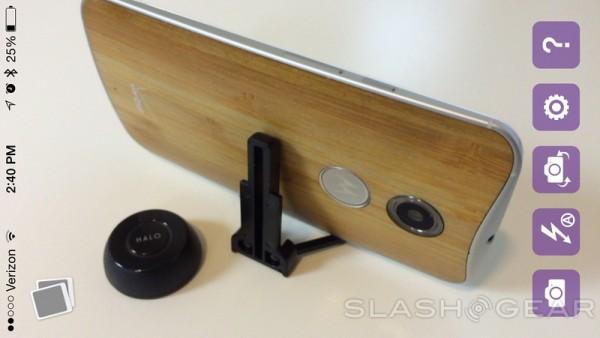 Halo doesn’t seem to work without its app, either. I tried it with the stock iOS and Android camera apps, as well as several other third-party apps, and had no luck.

The lone bonus is that you can use Halo with multiple phones at the same time (seen below, where i snapped a pic with an iPad and iPhone), giving you and your pals the ultimate group selfie. Of course, if you wanted to edit the photo you’d need another app, but that’s a pretty neat feature — especially handy as it works with Android and/or iOS. 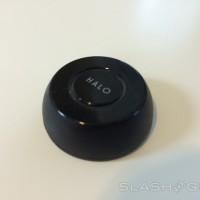 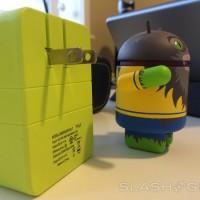 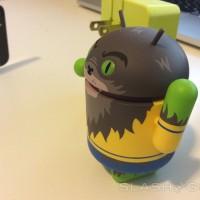 Halo looks like a toy, but it’s endlessly cool. It paired without any kind of trouble whatsoever, and the battery life is listed at five years when snapping 100 shots or more daily. You’ll forgive me for not testing that out, I hope.

Still, being tethered to the terrible app doesn’t help this one. I want to like Halo, because I can see some really neat use cases for snapping pics with a stationary camera (candid family shots during the holidays, pics of you actually playing with your kids when alone, etc.), but the app limits it severely.

At $24.99, it’s not going to do any damage to your bank account, but it’s not one I can recommend until (read: if) the app improves drastically. Should their software catch up to similar apps like it, or work with existing camera apps you’ll probably like better, Halo could actually be a really neat accompaniment to your photographic efforts.