Today we’re taking a peek at the best event in Pokemon GO all year – Halloween! As it was with the very FIRST special event in Pokemon GO, so too shall it be this year. Spooky, scary, shenanigans, aplenty. This year Gengar returns with a special costume the likes of which we’ve never seen before – it’s weird!

You’ll find both Gengar and Sableye in the wild with costumes. Normally you’d have to catch a whole lot of Gastly to evolve into Haunter, then into Gengar, but NOW it’ll be a whole lot easier to get the ultimate goofball Pokemon for yourself. This event will also release MEGA GENGAR for the first time in Pokemon GO.

This event will release a G-Yanmask for the first time – that’s Galarian Yanmask. There’ll be a Shiny Spiritomb too – alternate reality! The entire event long, you’ll have 2x catch candy and 2x transfer candy. So don’t go transferring everything before the event begins! Stock up now! Below you’ll see an image from The Silph Road. 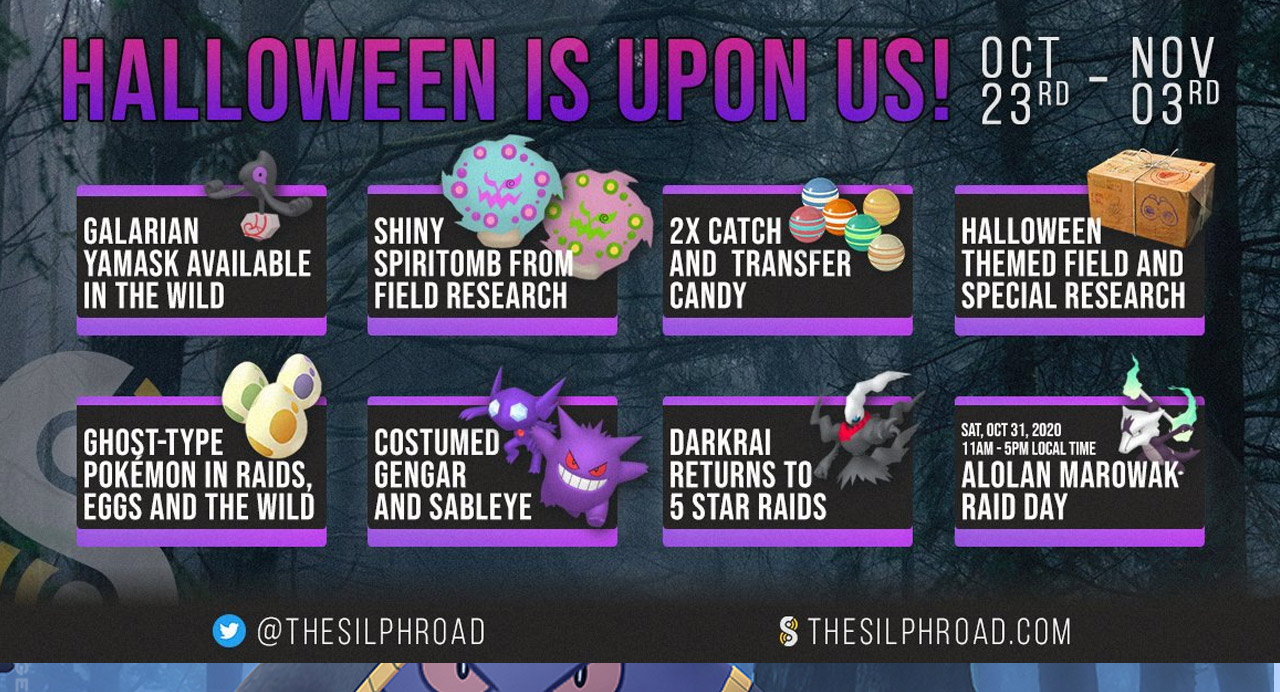 The Pokemon GO Halloween event starts on October 23, 2020, at 6PM PDT (GMT-7) and lasts until November 3! That’s a whole lot of event! Make sure you stay safe during this event, especially on and around Halloween. More now than ever before, it’s important to avoid strangers as well as people you know to be strange!

ON Halloween, October 31, 2020, you’ll find an Alolan Marowak raid day. That’s Halloween, 11AM to 5PM local time – wherever you might be! The entire time this Halloween event is going on, you’ll see Darkrai in 5-star raids too. Let us know if you’ve seen any SHINY Darkrai – at the moment, their appearance is dubious!