Sesame tries to be a smartphone you can use without hands

The smartphone is slowly but surely becoming an integral part of our modern lives. But if that’s the case, many in society who cannot physically use a smartphone will feel like they’re being left in the Middle Ages. Although hands-free features are starting to become fashionable these days, few if not none are developed with the needs of people with disabilities in mind. Those are the needs that Sesame wants to address, by allowing such people to use smartphones simply by uttering the magical phrase “Open Sesame”.

The Sesame smartphone isn’t actually some fancy new smartphone with fancy new sensors. It is basically a Nexus 5 with the specialized Sesame software installed on top. But it is that software that actually makes a world of difference for the user. It utilizes the exact same hardware, like the front facing camera and the microphone to give people with disabilities the same range of features that are available to most people, just without having to use their hands. 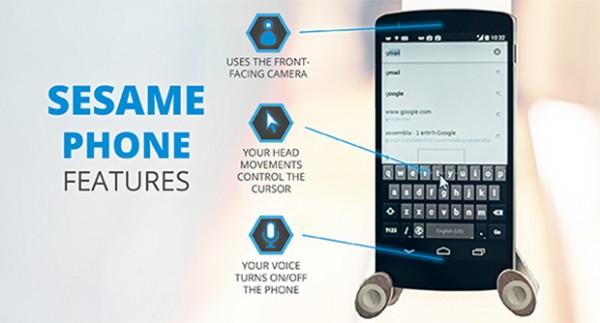 “Open Sesame” wakes up Sesame, and the device if the screen is turned off. Conversely, “Close Sesame” turns it off. Users are of course free to choose their own trigger phrases. Once Sesame is active, users can simply use their head movements in order to control the visible cursor that the system places on the screen. That’s all there is too it and it may sound basic, but it perfecting that system is really the hard part. The results, however, are definitely worth it, as Sesame would allow users to make calls, browse the web, post on Facebook, or even play Angry Birds, with little to no assistance from others.

Considering that very few people, much less companies, are interested in turning something like Sesame into a commercial product, it isn’t surprising that its makers are turning to crowdfunding for support. Sesame is running a Flexible Funding (meaning they get the money whether or not they meet their goal) campaign right now on Indiegogo and a pledge of $700, split into two between now and when it ships in March 2015, will get you one Sesame-powered Nexus 5. The team is asking for $30,000 and have so far only raked in almost $11,500, but they do still have 29 days to go before it comes to a close.