SED-TV is something that no amount of words can describe. It is something that must be SEEN to be believed; literally. SlashGear journey in to the world of SED-TV through an actual demo. But, what exactly is SED-TV? To unravel the mysteries of SED-TV, a history lesson is quite helpful. 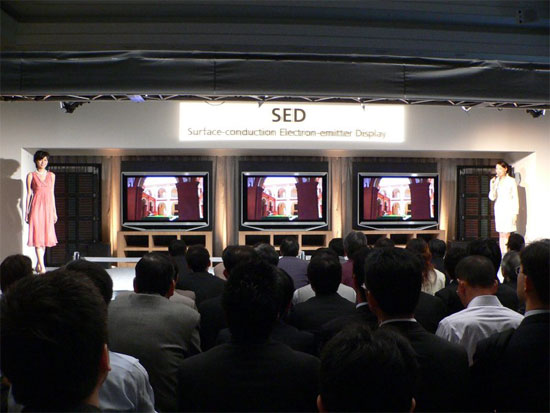 (The two images above are courtesy of TechOn.)

There’s nothing like a great rivalry between companies, especially if it’s over one product. The consumer decides who wins this tug of war, and in the process gets the best possible end result. Both companies strive to win over the customer, by any means necessary, whether it is a lower price, more extras, or just anything that takes that extra step to make us happy. This is what lies in store for the electronic giants Toshiba and Canon. 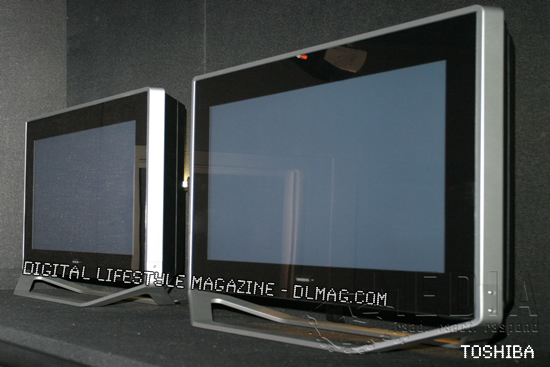 Canon began to visualize and develop SED-TV as early as 1986. In 1999, Canon joined forces with Toshiba in the development of this new technology. With the future looking so bright, the two started a joint venture company: SED Inc. However, fate has brought these two seemingly friendly corporations in to a battle for a better SED-TV. That’s right; SED-TV will be available from BOTH. Who will become the leading company to place their name on it? Well, that part is up to us. 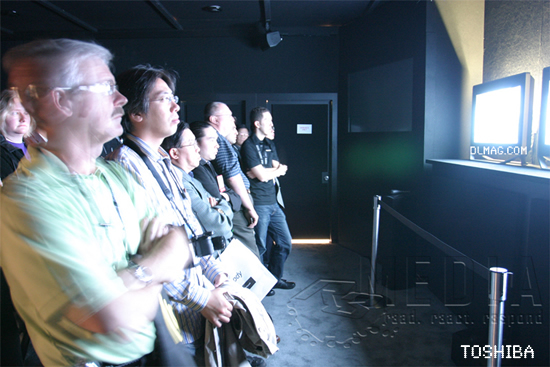 So, now that the history lesson is done, you might be wondering what exactly SED-TV is. In many ways, SED-TV is the future of display as we know it. SED stands for “Surface-conduction Electron-emitter Display”, a name that those not blessed with “digi-genius” will be unable to comprehend. Simply put, this type of display takes the best parts of CRT monitors (the fat one’s), and puts it in to the body of flat panel one’s (skinny one’s).
For simpletons, this explanation will do, but for those who are brave, read on for more details on what will undoubtedly revolutionize display viewing.

For the tech junkies, here’s how SED-TV works. The display consists of two flat piece of glass, sealed with a vacuum in between. One of the glasses is covered with electron emitters, while the other is covered with phosphorus. These are both methods used in CRT televisions today. The vacuum in between the glasses is only half an inch thick, which allows for extremely thin monitors. Each electron emitter is matched up with a pixel on the monitor, allowing extreme precision in images! Imagine the clear concentration of each pixel, offered in an extremely thin package; this is essentially SED-TV. These are just the basics of the technology, and for more information be sure to watch SlashGear’s EXCLUSIVE interview with Michael Zorich (Director of Marketing of Canon).

So, the technology is brilliant, but what is the end result? Again, this is something that must be seen to believe, but a basic description is possible. With the extreme precision of SED-TV, visual quality is superior to anything we have seen on the market. For one, angle viewing is no longer a problem. With other flat panels, sitting on the side of the monitor at an angle, there is a significant loss of quality and view. This is not a problem with SED-TV, as everyone sees the same gorgeous images!

SED-TV is also so precise, that an object moving at high speed can still offer crisp clear letters! On any other TV, a blur would utter this impossible, but not with the SED-TV display. Colors are extremely vivid and unbelievably sharp, offering views that are as lifelike as it gets. Words do this display no justice; it must be viewed to fully comprehend what SED-TV is. Luckily, SlashGear offers an exclusive demo of SED-TV that you will not find anywhere else. So, click on that link, sit back, and enjoy viewing the mind-blowing quality.

It’s important to note, that the demo is running on 720p, and is a video, so the quality is a bit worse than the actual technology. The final product is slated to run on 1080p, which only adds to the solidity of the display. Also, the demonstration is running on a 36” monitor, but final products will be much larger, including an announced 55” version with 8600:1 contrast ratios! The final product should become available sometime in 2007 worldwide.
Now, wipe off your drool and face the facts. Such revolutionary technology doesn’t run cheap. Though no official word on price has been announced, think BIG. Most people will probably be unable to afford one of these 55” badboys in the living room. This product will most nearly be aimed at large companies that host big social events. For example, a big SED-TV monitor would be perfect for a movie-of-the-year premier.
https://www.youtube.com/watch?v=hxv7mmKHRhs
SED-TV is the future of digital image displays; it’s as simple as that. There is currently nothing on the market that comes remotely close to Canon’s offering. Now, the question remains, how will Toshiba respond to Canon’s extremely successful debut of SED-TV technology? Either way, we are all in for a great treat as this technology becomes more widespread. Well, that’s enough text about SED-TV, go ahead and click on the videos, and see the breathtaking future in action.
http://video.google.com/videoplay?docid=1478427017283711408&q=IFA2006]
Video courtesy of IFA2006.net