Seagate GoFlex Satellite: 500GB of WiFi-drive for your iPad

Seagate has unveiled the GoFlex Satellite, the company’s latest external drive, and the first from its range to pack a battery and integrated WiFi connectivity. The Seagate GoFlex Satellite is a 500GB portable HDD, capable of sharing content either via USB 3.0 (using Seagate’s interchangeable GoFlex connector) or with its WiFi b/g/n radio to your iPad, iPhone or Android device.

Once connected, you can browse movies, pictures, music and documents stored on the GoFlex Satellite from your iPhone, iPad, iPod touch, Android smartphone or laptop. Currently Seagate only has an iOS-specific app, GoFlex Media; Android phones and tablets, and any other devices, have to access shared media through a web interface. The company tells us an Android version is in the works, however, and should arrive later in the summer. Up to three devices can connect simultaneously, either viewing the same content – so three iPad users can watch a film together in the car – or accessing different media. 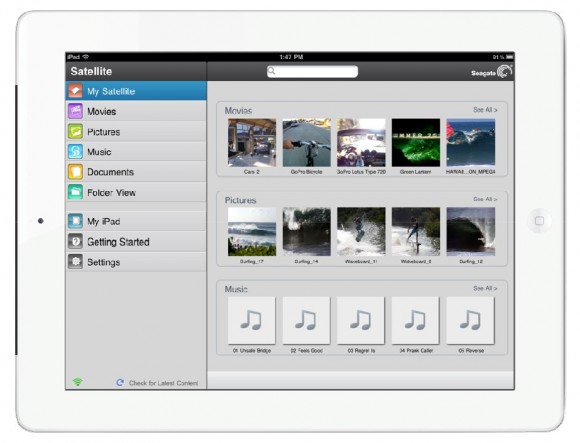 Seagate predicts GoFlex Satellite users will see five hours of active video streaming out of a full charge, or up to 25hrs standby. The iOS GoFlex Media app actually caches the video you’re watching on the device itself, so that the drive can go into standby. There’s some intelligent content management, too: dump all your videos, photos, music and documents onto the drive however you want, using the bundled Media Sync app for Windows or Mac, and it will automatically index them into categories for the app or web interfaces. The drive is visible to third-party apps, too, so if you have DivX video you want to watch on your iPad, you’ll be able to play it using VLC for iOS or an alternative app.

Right now, the biggest issue is that the drive demands a direct WiFi connection, which means that you can’t, say, hook your iPad up to it and simultaneously have the tablet connect to your WiFi router or mobile hotspot. However, Seagate is promising a firmware update in the near future that will allow the GoFlex Satellite to connect to a WiFi router itself and – since it actually has twin wireless radios inside – bridge that connection to whatever gadgets are accessing its storage.

The Seagate GoFlex Satellite will go on sale in the US in July 2011, priced at $199.99. Global availability should be later this summer.

SCOTTS VALLEY, Calif. — May 16, 2011 —Seagate (NASDAQ: STX), today announced GoFlex Satellite™ mobile wireless storage, the first battery-powered external hard drive to wirelessly extend the storage capacity of any Wi-Fi enabled mobile device. With 500GB and Wi-Fi access over 802.11 b/g/n and a rechargeable battery, this latest member of the GoFlex® family provides the ability to carry an entire library of video, music, pictures and documents with you. Devices are wirelessly connected directly to the GoFlex Satellite drive by use of the free GoFlex Media™ app—available now on iTunes and the Apple App Store—or a web browser. GoFlex Satellite is available immediately for preorder from Seagate.com, Amazon and BestBuy.com for a manufacturer’s suggested retail price of $199.99, and is scheduled to arrive in Best Buy stores in July 2011. Global availability is planned for later this summer.

“With the growth of the tablet and iPad markets and the larger volumes of high-quality media now being consumed, there is a clear need for access to content that is not plagued with the challenges of streamed video over the Internet,” said Patrick Connolly, vice president and general manager of Seagate’s retail group. “The unfortunate fact is that these popular new mobile devices are hampered by their limited storage capacity while one of their primary functions is that of media consumption.

“With the GoFlex Satellite mobile wireless storage, we wished to create an elegant solution that provides real value to the multitude of iPad users out there by delivering a seamless connection to local storage. No longer will a consumer feel as though it is a compromise to purchase a lower capacity tablet or iPad. With GoFlex Satellite, people will be able to carry their entire media library with them without the need for wires or the web at a fraction of the cost of adding 3G or purchasing or a higher capacity tablet.”

Streaming over the Internet has enabled video access for tablet owners, but the quality is at the mercy of the Internet connection, be it over Wi-Fi or 3G/4G. With more connected devices per hotspot, it’s often difficult to watch video without choppiness or pixilation. Rather than rely on a buffered stream from a distant provider, GoFlex Satellite mobile storage wirelessly serves up media content as a local attached storage for up to three devices at the same time. With a stand-by battery life of up to 25 hours, the powerful lithium polymer battery delivers up to 5 hours of continuously streaming video. To help with extending battery life, the free GoFlex Media™ app provides a progressive download feature, which temporarily loads the video on to the iOS device it is being streamed to, allowing the drive to go into stand-by mode.

Initially available for Apple iOS devices, such as: iPad, iPhone and iPod touch; the GoFlex Media app provides a seamless way to connect the mobile wireless storage to your iPad or iPhone. The Android app is expected to be available by this summer. Those that currently use an Android smartphone or tablet can access content on a GoFlex Satellite device through its browser.

The easy-to-use Media Sync software, also included free with purchase, makes grabbing media from a Windows® PC or Mac® OS X computer a breeze. Wherever the files are stored, whether that is a file structure of your own creation or in an iTunes library, the Media Sync software will load all of your desired music, videos, photos and documents on to the GoFlex Satellite drive. Media Sync is easily configured to only place files on the drive that are compatible with your iOS device. Even music and videos purchased through iTunes can be loaded to the GoFlex Satellite drive and will play on all authorized devices.