In the world of external storage the upgrade path is obvious: slap a bigger drive in your enclosure and wait for people to fill it with media. Seagate’s GoFlex Storage System, however, takes a slightly more complex route; thanks to an array of interchangeable cables individual FreeAgent drives can be used with not only USB, eSATA and other ports, but in a range of media players and docks. Is the flexibility worth putting up with an unusual port? Check out the full SlashGear review after the cut.

Seagate sent us a basic FreeAgent mobile drive – which comes as standard with a USB 2.0 connector – together with an optional GoFlex eSATA adapter. Both mobile and desktop drives are available (up to 1TB in the former, 2TB in the latter), while GoFlex Upgrade Cables for USB 2.0 ($19.99), USB 3.0 ($29.99), FireWire 800 ($39.99) and eSATA ($19.99) are offered. Unfortunately the Seagate docks – which include various desktop models together with media-centric versions that hook up to HDTVs and, optionally, wireless networks – weren’t available for us to try.

At first glance the FreeAgent looks relatively normal for an external drive. Silver plastic with curved edges, it won’t stand out among HDDs but neither does it offend the eyes. The plug adapter itself slots into an exposed SATA port – with a power connector – on the drive; the standard USB 2.0 adapter is in matching silver and has a removable cable, while the eSATA adapter is black and has a fixed cable. Changing the adapters is a simple case of pulling one out and clicking another into place.

Transfer speeds were as you’d expect from a USB 2.0 or eSATA interface, with no real difference between the FreeAgent GoFlex and a regular external drive. Seagate boast PC and Mac compatibility for their NTFS formatted drives, thanks to a preloaded OS X patch you need to install on first connection. 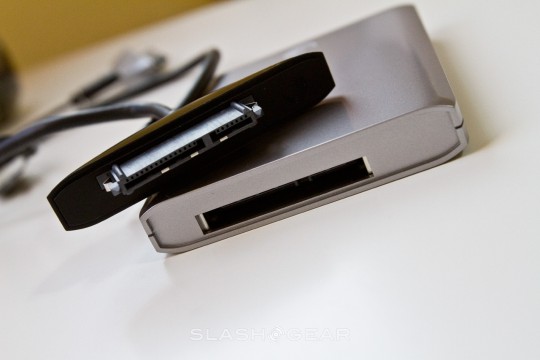 Of course, the real dilemma when you’re dealing with a non-standard cable solution is how consumers might get locked into a system that’s later discarded by the company responsible for it. The reason USB, eSATA and other connectivity standards are popular is that they’re cross-platform compatible: we can plug a USB drive into our computer today, and know there’s a 99.9-percent chance we won’t have problems also plugging it into whatever computer we’re using tomorrow.

Now, we’re sure Seagate would insist that they’re suitable committed to GoFlex, and indeed if they can encourage enough users to jump onboard then it’s a neat lock-in; the HDD equivalent of printer ink cartridges, perhaps. Should it prove less successful, however, how long are Seagate continue to produce GoFlex-compatible devices and accessories? It’s a problem you don’t generally face with a standard USB or eSATA drive.

Since Seagate will sell you the basic drive section without a bundled GoFlex adapter, it’s possible you could save a little money if you need multiple drives and don’t mind switching a single Upgrade Cable between them. You’ll save $10 on each that way. Nonetheless, on a dollar per GB basis, it’s still cheaper to buy a basic, USB 2.0 drive, and in fact with a little online searching you can find combo USB/eSATA drives for less than the price of the FreeAgent and both GoFlex adapters.

If you’re willing to buy into Seagate’s vision of a GoFlex enabled home media system then perhaps the new FreeAgent line-up makes more sense. We can certainly see the appeal of a simple snap-in HDD setup that takes plug-and-play drives from PC to HD media player and back again. Problem is, thanks to numerous HD-capable set top boxes with USB or eSATA ports you can just as easily do that with a regular drive, albeit losing some of the slick tidiness of Seagate’s setup along the way.

In the end, while the Seagate system works we’re not 100-percent sure it’s necessary. When the day comes that you’re desperate for USB 3.0 connectivity, is your original 1TB HDD really going to be sufficient, or will multi-terabyte drives be the status quo? Backward compatibility in USB 3.0 for 2.0 and earlier means that the new interface is probably as flexible as most consumers will ever demand, while market competition will likely keep prices lower than Seagate’s multi-component drives. The Seagate FreeAgent GoFlex drive makes sense, it even works well; it just feels like a solution in search of a problem.

Update: Seagate have clarified that the port used to connect the drive to the Upgrade Cables is, indeed, SATA.  Their hope is that one day various third-party accessories and devices will have a GoFlex-compliant SATA port so that it’s not just their own range of docks and media players will be compatible.  While that removes some of our concerns regarding future compliance, we’re still uncertain that consumers require flexibility beyond what USB, eSATA and other more common external drive connectivity brings.